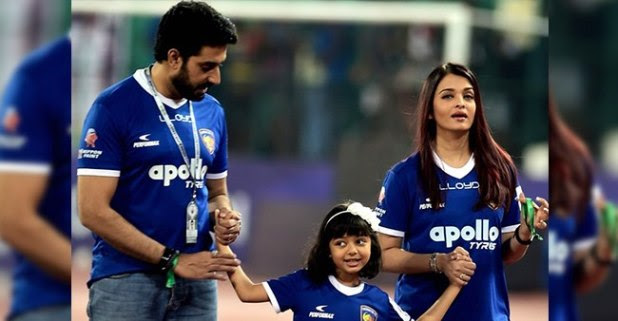 Bollywood actor Abhishek Bachchan was one of the team player in the celebrity football match and to cheer him, his wife Aishwarya Rai Bachchan and his eight-year-old daughter Aaradhya were present there. Aishwarya and Abhishek were also seen sharing a warm hug and Aaradhya was in her dad’s arms at that time. A viral video from the match also seen Aaradhya running up to her father.

Other pictures from the match also went viral in which duo of mother and daughter was seen watching the football match from sidelines. Both Aishwarya and her daughter were dressed casually. The actress wore a dark blue jersey, a pair of leggings and sneakers. Aaradhya was seen in a pink T-shirt and a pair of leggings.

As per the reports of onlookers from the match Aaradhya told her father: ‘I love you 32’ as 32 is Abhishek’s jersey number. The sentence is also a version of the famous dialogue from Marvel hit, Avengers: Endgame in which Tony Stark’s daughter says ‘I love you 3000’ to him in the film.

On the work front, Abhishek and Aishwarya are expected to be seen together in an Anurag Kashyap production film titled Gulab Jamun. At the same time, rumours are suggesting that the couple is no longer the part the project. On the other hand, they might be seen working in Sanjay Leela Bhansali’s project based on biopic of poet-lyricist Sahir Ludhianvi and poet Amrita Pritam. Aishwarya also has a project with director Mani Ratnam. The film will also star Tamil actor and her Raavan co-star, Vikram. The actress was last seen in Fanney Khan in the role of a singer and she was starred opposite Anil Kapoor and Rajkummar Rao. However, the film didn’t work well at the box office.