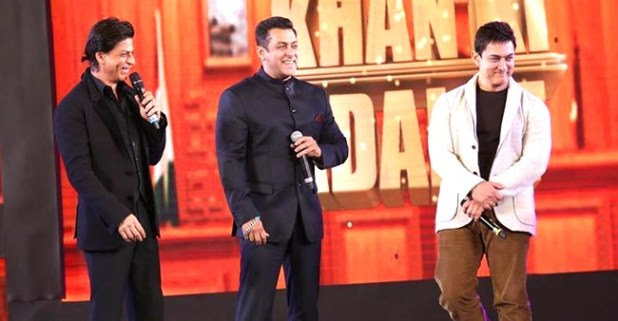 Bollywood’s biggest superstars Aamir Khan, Shah Rukh Khan and Salman Khan may not have featured together for a movie, but they now, meeting each other frequently. Yes, that’s right, reports suggest that the three Khans of Bollywood – Salman, Shah Rukh and Aamir, have been meeting secretly and frequently.

But don’t just get excited yet, unfortunately, we won’t be seeing them together on screen any time soon. The report quoted a source saying, “It’s become a regular thing for Salman Khan, Shah Rukh Khan and Aamir Khan now – whenever all three Khans are in town they catch up, no matter how hectic their schedule is, but now all meetings are very discreet and usually impromptu.

“The three mostly meet at Shah Rukh’s palatial bungalow in Mannat as Aamir and Salman live very close to SRK and his residence is secluded. Interestingly, Salman is so careful to avoid any media he only takes his driver with him and arrives alone to meet the others. Last time, someone had leaked out their meetings and details hence the need for secrecy for the trio. Aamir too comes alone and all three spend the night chatting away and catching up on most of the news till early morning and meeting pretty frequently,” the source further revealed.

Despite the meetings, the source did clarify that despite the secret meetings, there is no movie in the pipeline. The source added, “Apart from their high fees, it is logistically also almost impossible to get the trio doing a film together though Salman and Shah Rukh have appeared in each other’s home productions in special appearances.

“When they meet, apparently, their talk is mostly about the current actors like Vicky Kaushal, Karthik Aaryan and Ayushmann Khurrana doing so well and praising their work and the success of their movies, how they need to plan and strategize their own careers for the future, catching up on their lives and Bollywood news. It’s a relaxed, casual atmosphere with the three Khans just meeting, planning, and talking informally away from prying eyes… Hotels are not their meetings points as the paparazzi and public are always there.”

Well, to be honest, we’re just happy to them all together, with all the petty issues sorted once and for all.