A throwback video of Kartik Aaryan is surfacing on the Internet 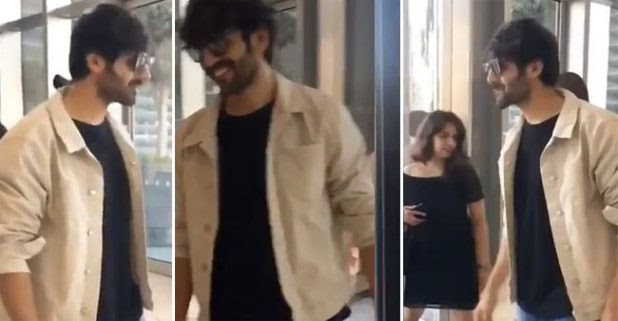 Bollywood actor Kartik Aaryan is one among the actor who made his identity in Bollywood industry purely based on his acting talent. He neither had a god father in the industry nor he is star kid and this made his own place.  The talented actor has done films like Akaash Vani(2013) and Kaanchi: The Unbreakable (2014), Pyaar Ka Punchnama 2 (2015) and Sonu Ke Titu Ki Sweety (2018), and he was recently seen acting  in the romantic comedy Luka Chuppi (2019).

Well, as we are talking about Kartik a throwback video is being circulating on all over the internet. The video is from the Masala! Awards 2018 that were held in Dubai in December last year. In the video clip, it can be seen that Kartik & his team is entering a hotel via a revolving door. However, the  actor manages to get through, his team gets stuck inside the door.“Meri team atak gayi hai!,” he can be heard saying in the clip. “There’s oxygen na, inside?,” he chuckles.

The actor is currently busy in the shooting of Imtiaz Ali’s next which is called Love aaj kal by many reporters. Nowadays,  he has a clean-shaven face and short hair which appears to be his look from the film. Currently, the actor is shooting for the third schedule of Imtiaz’s film in Mumbai. His photos while wearing a red turtle-neck skeevy on the sets got surfaced on the internet.

The two schedules of the film are already done that were in Udaipur & Delhi. The film also stars Sara Ali Khan opposite to Kartik Aaryan. It also features Randeep Hooda in the role of Kartik’s love advisor. It is the second time after Highway (2014) that Imtiaz and Randeep are collaborating. The film is scheduled to release on box office next year on February 14, the Valentine’s Day which is going to clash with Mohit Suri’s Malang that stars Aditya Roy Kapur, Disha Patani and Anil Kapoor in the lead roles.