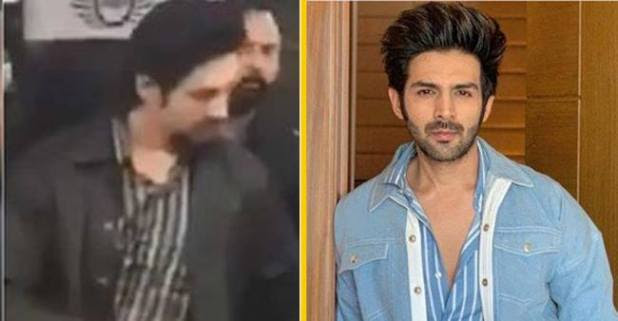 Kartik Aaryan is one of the best Bollywood actors who made his debut with the film ‘Pyaar Ka Punchnama’ directed by Luv Ranjan. With his roles in the films Kaanchi: The Unbreakable and Akaash Vani, he had turned out to become a romantic interest for the female fans and followers. Recently, the actor’s new look from his upcoming film Love Aaj Kal 2 has been leaked in Udaipur.

From the previous pictures, we can see the actor appears in a completely normal look just like a boy-next-door. The sequel for Love Aaj Kal 2 features Sara Ali Khan who plays the female lead role. In the first film of Love Aaj Kal, Deepika Padukone and Saif Ali Khan starred together. Everyone is highly excited to watch the sequel of the film starring Kartik and Sara.

It is for the first time for the duo to share the screen space. After finishing the film’s schedule in Delhi, Kartik Aaryan soon moved to Udaipur for the subsequent schedule. We expect that the actor might appear in different avatars for the upcoming film. In the latest video leaked online, Kartik looks truly different in Udaipur schedule. A new video of Kartik surfaced online wherein we can see Sara and Kartik speaking about the film.

From the video, we can see Kartik in casual jeans and shirt paired with a jacket. We can even see Kartik’s bodyguards stopping the shutterbugs from capturing the pictures of the actor. Sara Ali Khan and Kartik starring LAK2 film are scheduled to release soon this year. He is taking part in the remake of Pati Patni Aur Woh which is scheduled to release in the month of December 2019. In this film, Kartik’s look is quite identical to Ranbir Kapoor’s look in the film Tamasha.