Shilpa Shetty and Raveena Tandon Reunion on the sets of Super Dancer 3, Look at the Charming Photos! 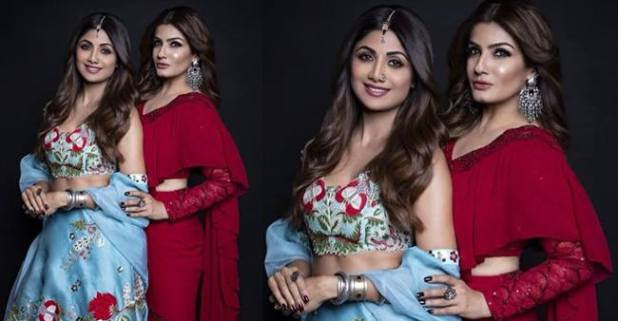 Raveena Tandon and Shilpa Shetty, the leading actresses during the 90s period have once again spotted on the sets of Super Dancer 3. The director Anurag Basu is the judge of this popular show. Due to some issues, the director skipped the shoot for the reality show this week. The producers of the show have planned to bring the popular actress Raveena Tandon on the show.

The duo might have had some issues in their personal life. Akshay Kumar had an affair with Shilpa Shetty Kundra before marrying Raveena Tandon. However, all this happened in the past. Now, the actresses have become close friends and check it out on the Instagram post.

Raveena Tandon shared a video featuring the two actresses on her official Instagram handle. From the video, we can witness the duo playing with their dupattas. She even captioned the picture as ‘Funtime is always when working with friends…’

Shilpa Shetty shared another spectacular picture of the duo and captioned it as ‘Was sooo good having my friend @officialraveenatandon as our guest judge on the #superdancer chapter 3 panel today. Sooo much fun. Miss those old times ☺️ Can I be #cheezy and say .. “Swasth raho Masssst Masssssst Raho.’

If you are a fan of the actresses from the 90s period then, you will definitely enjoy watching them together on the same screen. Earlier, Shilpa Shetty revealed about her relationship with Akshay Kumar during an interview. She then said, ‘I never imagined that he could two-time me and that too all along with our relationship.’

Speaking about the professional front, Shilpa is quite busy with her TV show commitments. On the other hand, Raveena Tandon is quite popular for her books and writings.