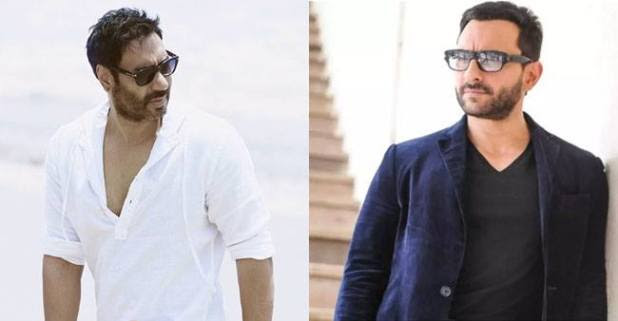 Everyone is highly excited about the upcoming film of Ajay Devgn – ‘De De Pyaar De’. The filmmakers launched the trailer of this film a couple of weeks back. The trailer looks totally funny and entertaining. The one thing that captures everyone’s attention is Ajay mentions the age difference between Saif and Kareena in the trailer. He just considers them as an example for supporting his shrink of dating a young girl.

Rakul Preet Singh is the young girl whom Ajay Devgn wants to date at an old age. From the trailer, we can witness Ajay saying that he is not the first time in the history for an old man dating or having a relationship with a young woman. Besides the names of Saif and Kareena, he also tells some other examples such as Michael Douglas and Catherine Zeta-Jones, George Clooney and Amal Clooney.

As per the latest reports, Saif had come across the dialogue from the film’s trailer and his reaction is completely different. He said, ‘Hey, that’s cool, man.’ Moreover, Saif is truly happy as Ajay Devgn is trying to carry out an experiment with such pleasant roles. For those who are not aware of Saif’s reaction felt that that particular dialogue might bring clashes between him and his wife. However, nothing like that has happened as of now.

For the uninitiated, Saif is 48 years old while Kareena is 38 years old. However, the couple has once again proved that age doesn’t matter if they have pure love between the couple. De De Pyaar De is a romantic comedy flick which is slated to release on 17th May 2019. The film features Ajay Devgn, Rakul Preet Singh, and Tabu in the lead roles.