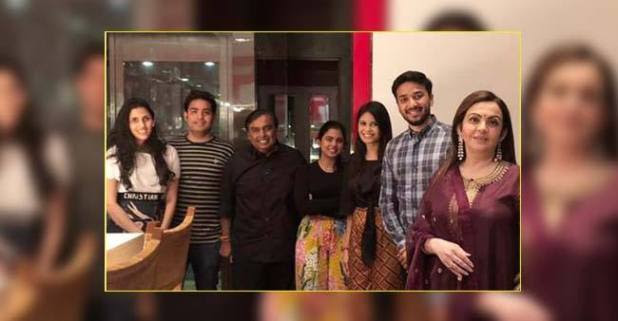 Who doesn’t know Ambani family. Though they remain at top of the news now and then but they have been grabbing the attention with the wedding of Mukesh Ambani two children. Yes, the Marriage of Isha Ambani-Anand Piramal and then Akash Ambani-Shloka Mehta have been in news and on social media for quite a some time. Post the marriage of Akash-Shloka and Isha-Anand, the social media platforms are flooded with their pictures.

The newly wedded couple Akash Ambani Made his first appearance with wife Shloka Mehta when along with Mukesh Ambani, Nita Ambani and Isha Ambani Piramal they went out for a family dinner at Wasabi By Morimoto, Taj Mahal Hotel.

On April 25, Shloka was spotted at Anushka Rajan Doshii’s ‘The Pali Pop Up’. She was seen wearing a white ruffle top alonb with floral palazzos. She completed her look by opting for open hair, sunglasses and nude coloured strapped footwear.

On voting day recently, i.e On April 29 Isha Ambani Piramal, Mukesh Ambani and Nita Ambani and Anant Ambani was spotted at polling booth for the fourth phase of 2019 Lok Sabha elections. The gorgeous mother and daughter were looking radiant as always. On the same day, Shloka was looking beautiful in  floral look while Akash was looking great in formals. The newly wedded couple was accompanied by  Mukesh Ambani and Nita Ambani. The Ambani clan posed for the picture together with a smile on their face.

Post getting engaged to Akash Ambani in 2018, shloka had said “Despite years and busy schedules, we have always found ways to stay connected. Akash is incredibly grounded, and we share a bond based on meaning and memories. We don’t just get along – we also support each other’s hopes and aspirations and are determined to build a sense of purpose into our lives together. We are lucky to have a love that began with being best friends and luckier still to have such supportive families.”