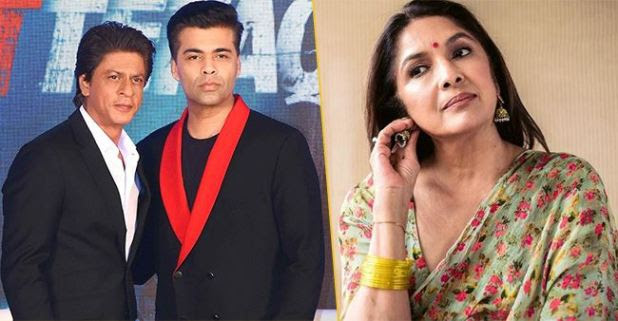 Bollywood and television actress Neena Gupta made her come back on the silver screen with film ‘Badhaai Ho’, which also starred Ayushmann Khurrana, Sanya Malhotra and Gajraj Rao in the lead roles. The film bang at the box office. Amit Sharma directorial film has been garnered a lot of appreciation from both critics and audience. The senior actress became so popular and even Shahrukh Khan and Karan Johar exchanged numbers with her. They gave their numbers to Neena Gupta.

All this happened when Neena’s daughter Masaba Gupta who is a renowned fashion designer today wanted to be an actress, but her mother Neena wanted her to let go of dreams. Masaba also launched the recently held Game Of Thrones (GoT) party in Mumbai. Her mother tried to convince Shah Rukh Khan and Karan Johar for the same during a flight. Shah Rukh Khan and Karan Johar shared their numbers with her but after that they did not receive her calls.

She reminded the incident when Neena heard the whole incident once again on film critic Rajeev Masand’s chat show, to this she jokingly said, “Yeah so mean, cheap kinda people they are.” She added, “They gave me there number and phir phone he nahi uthate the (didn’t attend my calls).”

She continued saying by giving the advice which she also to gave Masaba if the latter wanted to become an actress, “I told her if you want to be an actor then you go abroad. Because tumhara jis tarah ka shakal hai aur body hai, tumhe yahan Indian mileu mein bohot kum role milenge, even if you become a good actor. So, tumko woh heroine nahi milegi. Hema Malini nahi banoge, Alia (Bhatt) nahi banoge.”

On the work front, Neena’s daughter Masaba is running a successful fashion line and Bollywood actresses like Sonam Kapoor and Rhea Kapoor endorse her clothing. Also, actresses like Kangana Ranaut, Shilpa Shetty Kundra and Athiya Shetty are have donned her label.