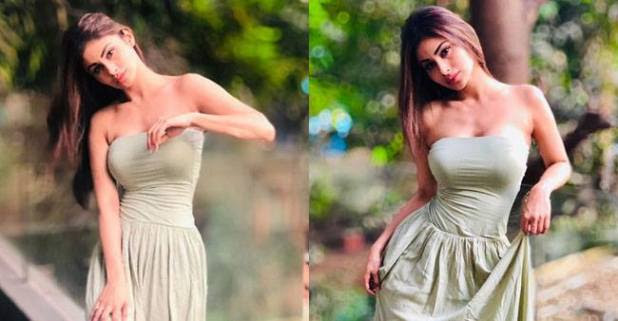 It is an undoubted fact that Mouni Roy is the most popular queen of fashion in the current trend. The actress is throwing the major fashion goals with her stunning pictures on her official Instagram handle. Mouni Roy recently shared some of the pictures on her account in a trendy outfit. We can witness the actress appearing in a strapless powder green maxi dress. The apparel appears truly simple but raising the fire among the Netizens.

In that outfit, Mouni Roy looks like a fashionable chic without wearing any kind of jewelry and other accessories. From the pictures, we can see the actress simply left open her hair. Her makeup includes eyeliner and a lot of mascara for highlighting her eyes. Her eyebrows looked truly strong in her makeup. The actress posted a series of pictures on her official Instagram handle and grabbed the attention of all the folks.

In her upcoming film Brahmastra, the actress will be seen featuring a role alongside Alia Bhatt and Ranbir Kapoor. This film is scheduled to release in the month of December this year. In this film, Amitabh Bachchan will be seen in a crucial role. As of now, Mouni Roy is shooting for the film ‘Made in China’ featuring Rajkummar Rao.

In the previous year, the movie hit the screens and the actress played the main female lead character. She will take part in the next flick Bole Churiyan starring Nawazuddin Siddiqui.