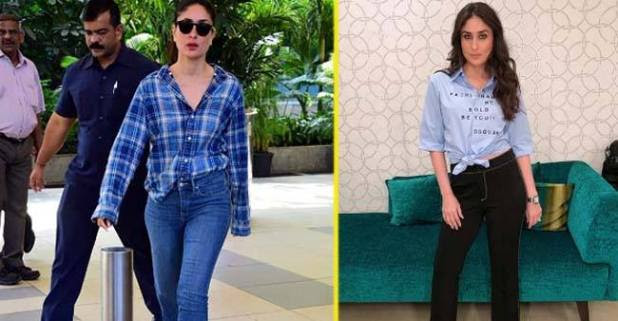 Kareena Kapoor Khan’s style sense is unbeatable. Whatever she wears, looks great in it and whenever she steps out in her casual clothes, she mostly spots in tees as this is her favorite piece of clothing. But, there are times when Bebo donned

buttoned-down shirts which are easy and a wardrobe must. She spotted wearing knotted shirt, pleated shirts, and others. Her shirts are ideal for the hot and humid summer season. Most of the time, when she wears shirts, she makes her hair wavy or a tie in a neat pulled back ponytail with soft, dewy make-up.

Here, have a look at all the Kareena Kapoor Khan look:

Talking about her work front, the actress has currently been shooting for her next film under Dharma Productions’ Good News. The film also stars Akshay Kumar, Diljit Dosanjh, and Kiara Advani in the lead roles. The film will release next year. She will next be seen in Karan Johar’s next venture, Takht alongside Anil Kapoor, Ranveer Singh, Alia Bhatt, Vicky Kaushal, Janhvi Kapoor, and Bhumi Pednekar.

The actress further was asked whether she has noticed any change in the industry when it comes to women oriented films, she responded, “I think there have been women centric characters for years. My mother-in-law has done different characters back in the 60s and 70s. She has done films like Aradhana and Amar Prem which were women oriented films. There are always women centric characters you just have to pick them at the right time, the right choice and the right script. I think everybody is picking good stories and wanting to do good roles nowadays.”