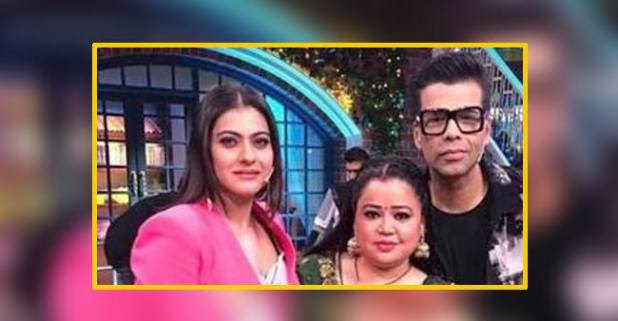 Bollywood actress Kajol and Producer Karan Johar are really good friends of the Bollywood industry. The two besties of Bollywood industry share years of great bonding because of the same level sarcasm, wit and unapologetically great sense of humour. We all get to know sarcastic is Kajol when she appeared in Karan Johar’s chat show Koffee with Karan along with her actor husband Ajay Devgan.

Well, after Koffee with Karan the duo will be next seen on screen as they are going to appear in one of the amazing episode of The Kapil Sharma Show. Just like every friends duo, they will be seen making fun of each other. As reported by Mumbai Mirror, there is one scene where Kajol is trolling Karan for showing off.

Let me explain you it in detail. The host of the show Kapil asked Karan to just imagine himself as Prime Minister of Bollywood and then naming the people from B-TOWN whom he will give Duffy designations in his cabinet. To which Karan said that he will appoint  Kareena Kapoor Khan as the ‘Ministry Of Gossip Affair’ , Ranbir Kapoor as the broadcaster, Akshay Kumar for the Health Ministry. Karan himself decided to appoint him as the House Party Minister.After hearing all this, Kajol called him ‘Show Off Minister’. To which he replied  “Am I a show-off? I am so down to earth that I am talking to you”.

With this instance, it proves that the episode is going to be a great fun where we all be able to seen the love hate relationship of two besties from entertainment industry.

Apparently, the duo bestie once upon a time had seen a down in friendship when Karan Johar’ Ae Dil hai mushkil and Ajay Devgan starrer Shivaay clashed at the big screen in 2016 and the duo were so adamant that none of them was agreeing to step down. However, with time everything is well and they have sorted all their issues.

eir films Ae Dil Hai Mushkil and Shivaay clashed at the box office and neither refused to back down.Kajol was last seen on big screen in 2018. She played a role of an aspiring singer in Pradeep Sarkar’s comedy-drama Helicopter Eela.