Kalank: Sanjay Dutt: Great to work with Madhuri again. I was nervous, but she made things easy 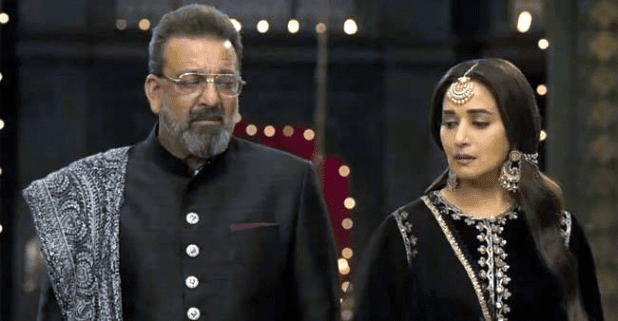 Abhishek Varman’s much awaited period drama, Kalank is all set to reach movie halls on this Wednesday.

In addition to the film’s enthralling tale and chartbuster songs, another best part of this flick is ace stars Sanjay Dutt and Madhuri Dixit who are joining hands yet again after a gap of 22 years.

That’s right! As soon as the official theatrical of the film was dropped online, admirers were on cloud nine to witness 59-year-old actor Sanjay Dutt and dhak dhak beauty Madhuri Dixit together on the silver screen.

But do you know that our dashing Sanju baba got panicky while filming with the actress after many years.

In a special interview with media, Sanjay disclosed that he was too worried to work with Madhuri Dixit after a big gap of 22 years. The actor added that the two connected over their children on the film sets.

During his talk with media people, the super star said, “It was great to work with her again. I was a little nervous, but she made things easy. She’s got terrific command as an actor. We spoke about our kids. In fact, I made my children [Shahraan and Iqra] meet her when they dropped by on the sets.”

For the unknown, Sanjay Dutt and Madhuri Dixit were said to be in relationship with one another during the early 90’s and during the promo launch of the movie, when Mads was questioned why she calls Sanjay as Sir, she answered that we all get mature with children and we love pulling each other’s leg.

Kalank is a historical drama set during the 1940s and the movie has biggies including Madhuri Dixit, Sanjay Dutt, Alia Bhatt, Varun Dhawan, Aditya Roy Kapur and Sonakshi Sinha in lead roles. Kalank will reach theaters on April 17, 2019.