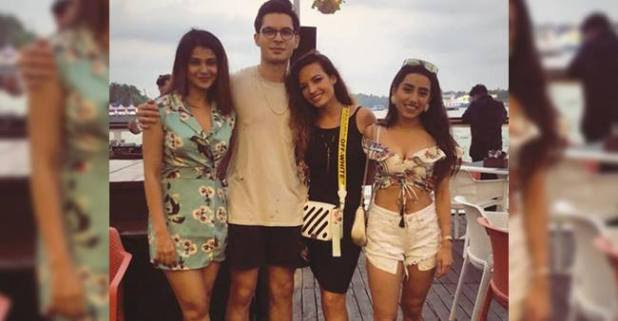 Indian television one of the popular face and gorgeous actress Jennifer Winget is having a great time. As today  on social media account the Bepannaah actress posted a picture chilling out with her group.of friends. The actress in sets of photographs can be seen wearing a floral blue dress and flashing a red lip color while posing with her friends.  She is popularly called Jenny by her beloved friends.

In one of the video which is being shared she along with her friends are posing for a Boomerang video while enjoying their drinks. The actress just returned few days back from a week-long Goa vacation, and soon after, she is spotted enjoying Easter with friends and family. On her social media account, she posted a picture and captioned it , “ Love in abundance at Easter time. Happy Easter all.”

Check out the stunning pictures of her below and for more of her beautiful pics you can go her Instagram account.

She made a special place in the hearts of her fans with her role of Zoya in Bepannaah. After which her fans are waiting to see her back on small screen. Well, there is good news for her fans as it is being reported that she will soon be starting shooting for season 2 of Beyhadh. However, neither she nor the makers of the show have officially confirmed about the show. It is also that she will be making her digital debut soon with a show on ALT Balaji that is tentatively titled Code M.