Janhvi Kapoor Loves These Two Expensive Bags The Most 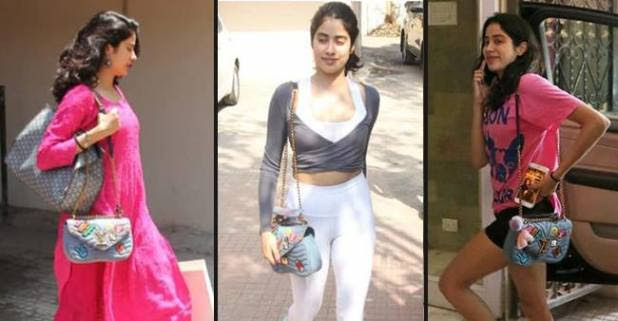 Sridevi’s elder daughter Jhanvi Kapoor even before her deduct as a actress in the Bollywood industry attracted many eyeballs. As a star kid, she has always been captured by papparazi at various events, functions, and award nights. As she entered B-town with film Dhadak starring opposite to Ishaan Khattar, her fan following is immensely increased. The diva has many choices to choose from whether it be for clothing, Jewellery, shoes and others but it seems that she is obsessed with only two of her handbags which respectively costs lakhs. She loves these bags so much that she carry it from gym, lunch to everywhere.

On a daily basis she is spotted outside her gym in different avatar, sometimes wearing shorts, tshirts, joggers, gym clothes but what remains common is her favourite bag of choice. She is always seen carrying her sling bag by Louis Vuitton which also had patches on it. Well, let me tell you the cost of her this bag……it costs $2270 which is around Rs. 1.6 lakh.

Apart from this bag, the other bag that Dhadak actress is obsessed with is Goyard Saint Louis grey tote bag whose costs is Rs. 1.5 lakh. The reason she being so in love with these bags is that they are spacious, comfortable , goes out with every outfit and occasion I think and stylish and luxurious too.

Which one is your favourite among the two???? I loved both of them;)

As well all know that she made her debut with Karan Johar’s Dhadak though he wanted to launch her with Student of the year 2. Now, she will be seen working in Karan Johar another movie Takht which is a historical drama. The actress will also be seen in and as Gunjan Saxena in the combat pilot’s biopic.