Janhvi Kapoor has made her fashion choices for this Summer season 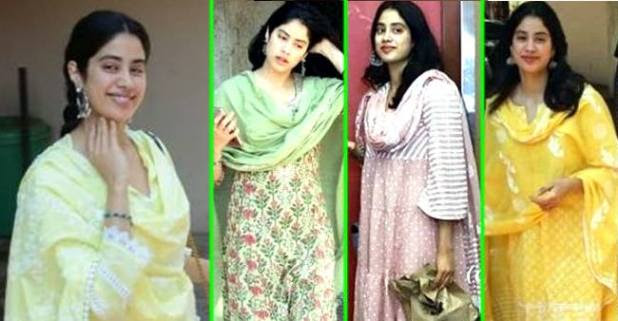 Bollywood actress Janhvi Kapoor though made her debut in industry with Shashank Khaitan’s Dhadak opposite to  Ishaan Khatter but she has always remained in news for being the elder daughter of . But much ahead late legendary actor Sridevi and film producer Boney Kapoor. She has always manged to attract the attention with her unique fashion choices and in the way she carries herself in different outfits.

As season of summer has just began the actress has shifted her fashion choices according to the season. She is nowadays majorly spotted wearingcotton outfits in light hues and bright colours. She prefers wearing kurtas and pants,  A-line polka dotted kurtas and palazzos in a pink, yellow and white colours. She prefers lighter colour palette and more of Indian wear, particularly kurta-palazzo sets, this season. The Dhadak actress complete her look with plaits, beautiful pairs of jhumkas and kohlapuri chappals and juttis.

On Saturday, she opted for wearing lemon kurta which had  white intricate embroidery and lace work. She decided to wear a flared Palazzo with kurta , a matching dupatta, jhumkas, and a loose plait.

For the screening of Avengers: Endgame she chose to wear an pastel pink polka-dotted suit set along with matching dupatta, white pallazos, jhumkas and a pair of juttis.

In this month earlier, she was spotted wearing a palazzo suit set in olive combining the season of spring and summer.

Janhvi looked stunning in a polka-dotted set and while the pastel pink one had its plusses, this one, too, is simply stunning. On the work front, Janhvi will be next seen  working in Karan Johar another movie Takht which is a historical drama. The actress will also be seen in and as Gunjan Saxena in the combat pilot’s biopic.

Talking about her personal life she is rumoured to be dating her Dhaadk costar Ishaan Khatter. However, the duo have not yet officially accepted it. Even in their respective episodes of Koffee with Karan the duo totally denied the rumours of their dating.The actress recently was seen in the episode of BFFs with Vogue along with her younger sister Khushi Kapoor which is hosted by Neha Dhupia.