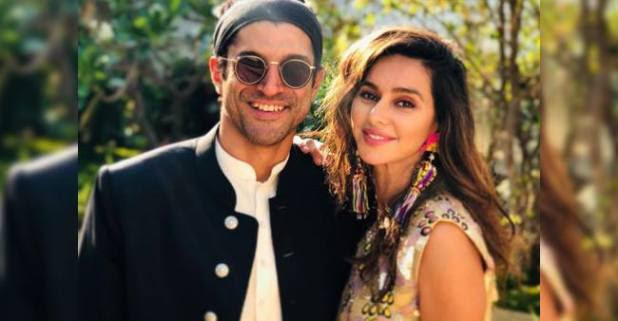 Actor Farhan Akhtar is on a sharing spree as he shared yet another picture of him with his girlfriend Shibani Dandekar on his Instagram account.  The duo seems to be having a great time together as they are sharing some serious pictures of late in the social media.  The picture received so much love from the fans and friends of the actor.  Farhan shared the picture and captioned it saying,“Sunshine and smiles. @shibanidandekar.”

In the picture shared, Farhan was seen wearing a bandhgala, accessorised with a hairband and aviators while Shibani is in total blend with him in a floral attire.  The actor received message from his Zindagi Milegi Na Dobara co-star Hrithik Roshan who wrote“beautiful” in the comments section while actor Dia Mirza left few heart emojis to the picture.

Farhan captions Sunshine and Smiles to the picture shared

Farhan and Shibani are dating since couple of months now.  The two recently visited Milkha Singh in Chandigarh and also shared a picture from their visit. Farhan shared the picture with The Flying Singh and his wife and captioned it, “Called Milkha ji to say we’re visiting Chandigarh and would like to meet him. He said ‘tumhara ghar hai. Jab chaaho aao.’ And it’s absolutely true Milkha ji.. you and your family do make it feel like home. Love you all. #MilkhaSingh #NimmiAunty @jeevmilkhasingh #Sonia #KudratSingh @shibanidandekar.

Not just Farhan, Shibani also shared a picture with Farhan and Milkha Singh and wrote, “Will the REEL/REAL MILKHA SINGH please stand up! #milkhasingh @faroutakhtar Was so amazing to meet this legend! Milkha Ji is such a sweetheart and has soooo much SWAG!! love him! Farhan you are pretty cool too.”

For the uninitiated, Farhan had played the role of Milkha Singh in the biopic titled Bhaag Milkha Bhaag directed by Rakeysh Omprakash Mehra.  The movie won appreciation from all the audience and turned out to be a blockbuster.  Coming to the work area, Farhan was last seen in The Fakir of Venice. The actor will be next seen in The Sky is Pink opposite Priyanka Chopra.