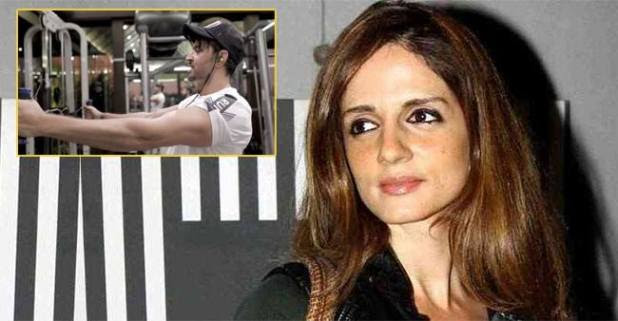 Greek God of Bollywood Hrithik Roshan is a single man now after divorce to Sussanne Khan. The actor is back on his working out regime after completing shooting for Super 30. Hrithik shared a video of his training session at the gym and wrote that it was much easier 20 years ago. On his work out post, his ex-wife Sussanne commented that he looks hotter than he used to 20 years ago.

Hrithik posted the video on Instagram with caption, “Transformation journey Day 2.Owing to too many injuries over the years I’ve adopted ZMR’s ( zero momentum reps). It helped my rehab along with gaining strength so much so that it’s now become a part of the HRX workout module at Cult.fit 1 rep could equal 1 minute. .n yeah that’s 10 pounds. (Gotto start somewhere right ?).And at the end your supposed to say faaaaaa….aaaa! ( a rule is a rule what can i say) . PS: this used to be so much easier 20 years ago) . #NoPainNoGain #Hrx #onemorerep #createyourself #bethebestversionofyourself #therearenoshortcuts #doitforyou #workonyourself #pushboundries #keepgoing.” Sussanne commented on the post: “You are more hotter than you were 20 years ago!

♥️,” alongwith a smily and a heart emoji.

The actor has been encouraged by his friends Anaita Shroff and Kunal Kapoor. They also posted some encouraging messages on the post.

For the film Super 30, the actor had lost weight to get into lean shape. The film is based on Bihar’s mathematician Anand Kumar. The mathematician selects 30 students from backward communities every year and teaches them to appear and crack the IIT examination. He also pays for their expenses during the coaching.

Filmmaker Vikar Bahl was directing the film earlier but later left the project after being accused of sexual misconduct late last year. And now, Anurag Kashyap brought on board for post-production.

Mathematician is really happy to see Hrithik in the film which is based on his life. So, he told the tabloid, “I was delighted and pleasantly surprised to see the first look wherein Hrithik sports a rugged, bearded look. I had been told that at present the shooting was being done of my college days. I took out an old photograph of mine, of the time when I was studying at Patna University. I found the resemblance to be uncanny.”