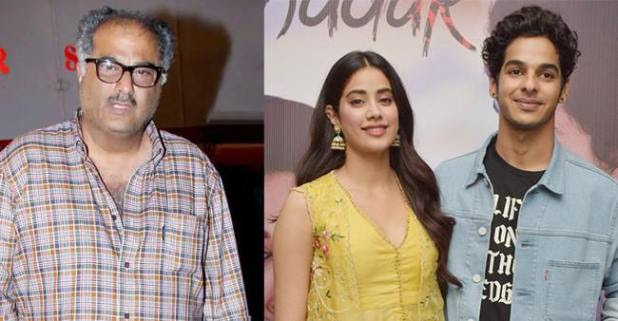 We all know that, Boney Kapoor and Late Sridevi elder daughter Janhvi made her acting debut with Karan Johar’s film ‘Dhadak’. The film also features Shahid Kapoor half brother Ishaan Khattar. From the time of the movie release, there have been so much speculation that the Janhvi and Ishaan have been  dating each other.

Though, they never officially accepted about their relationship. Even on the Karan Johar’s chat show Koffee with Karan, they both in their individual show denied about it when the host asked about the rumour. However, their meets , pictures of hanging together and words for each other speak a totally tale. Well, only they both know the reality behind all the rumours.

The Dhadak of her fans heart recently in a interview  with celebrity stylist Anaita Shroff Adajania revealed about what her father and producer Boney Kapoor thinks about Ishaan. When she was asked about what her father thinks about Ishaan, she said that  she doesn’t have too many dates because “Papa thinks no boy ever is good enough”. Ohh…..this is what daddy think about him.

The actress on Box office will be next seen in the Gunjan Saxena biopic and will also star in Karan Johar’s Takht alongside Anil Kapoor, Kareena Kapoor Khan, Ranveer Singh, Bhumi Pednekar and Vicky Kaushal. However, there is no news of Ishaan doing any film as of now.