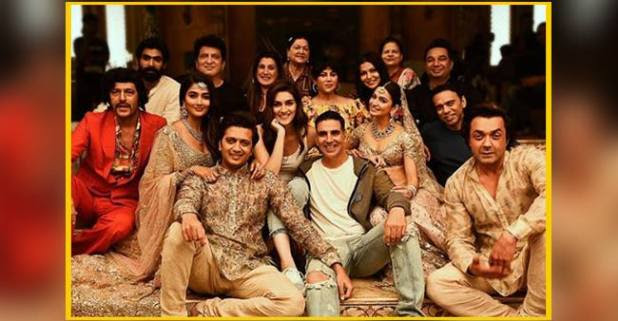 The hit franchise of Housefull is coming with its fourth installment with the star cast of Akshay Kumar, Kriti Sanon, Bobby Deol, Riteish Deshmukh, Pooja Hedge, Rana Daggubati and Chunky Pandey in the lead roles.

The film is eagerly waited by the audience just like the earlier installments of it. This part is based on the issue of reincarnation and it will go on two tracks simultaneously. In the one track, the actors and their lives will be seen in the present day. While, in another track, it will take us back in time almost 500 years ago.

In the film, it is said that Akshay will be seen playing the role of a maharaja in one segment. “Akshay Kumar will be seen as a maharaja in the segment that deals with the past life, with Bobby Deol and Riteish Deshmukh playing his royal courtiers. Turns out, the female actors – including Kriti Sanon, Kriti Kharbanda and Pooja Hegde – will step into the shoes of princesses,” as quoted by a tabloid.

Also, a few days back a picture of Akshay Kumar had gone viral from the set of the film in which he was seen in a bald look. As per the reports, in the first half of the film, the actor will be seen in the bald look. And, he will sport different looks as the king. “The fourth instalment offers a hilarious spin on reincarnation. In the first half that is set in the 16th century, Akshay sports different looks as the king,” informed the tabloid.