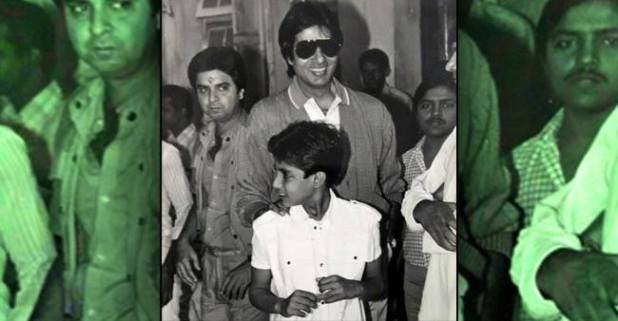 Amitabh Bachchan is an evergreen hero in the Bollywood film industry.  Big B has achieved so much and made big in the industry not just with his talent, but also with his handsomes looks.  He gained immense love from all over the audience and stood in the number one position for a very long time. Recently, Abhishek Bachchan shared a black and white monochrome picture of Amitabh Bachchan and himself on his social media handle.

In the picture, Amitabh Bachchan looked dapper.  He wore casuals and a funky pair of sunglasses which are the then trends.  The picture also has Abhishek Bachchan in it.  While Amitabh Bachchan is looking straight into the camers for a click, Abhishek who is a young child stands in front of him.  They seem to have appeared in a public event.

All the fans of Big B felt very happy to see the younger Amitabh that too in Black and White photo.  Big B seemed pretty glamorous in the picture as always.  He looked very young in the picture.  Abhishek took to Instagram to share the picture of his younger father and him.

Big B throwback picture is all you have to see today

The Guru actor posted the picture as a treat to all his fans and followers and captioned it, “Flashback Friday.”Other than Amitabh and Abhishek the photograph also features producer Romesh Sharma.  Abhishek often shares throwback pictures of his dad on his social page.  He loves to share pictures and keeps all his fans updated about his professional life as well.

On the professional front, the Big B is getting ready for the release of Brahmastra which is directed by Ayan Mukerji and features Alia Bhatt and Ranbir Kapoor in the lead roles.  Big B was last seen in Thugs of Hindostan and Badla.  While the former was a flop the later just completed its 50 days run at the box office. On the other hand, Abhishek Bachchan was last seen in Manmarziyaan along with Taapsee Pannu and Vicky Kaushal.