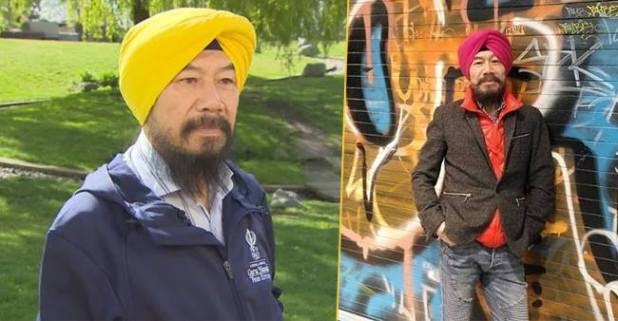 People who follow Sikh tradition are not only spiritual but they also serves the communities around them. This made a Chinese man to embrace Sikhism. He is Pat Singh Cheung, one of the very few Sikhs of Chinese-descent in the world who hails from Vancouver’s Chinatown. A long line of people outside a Community centre intrigued him and made him to go to inquire about the same. He was handed a glove to start distributing food at Guru Nanak’s Free Kitchen there.

After distributing food at Guru Nanak’s free kitchen, Cheung decided to embrace Sikhism in its entirety. The man now wears a turban with uncut hair and he also wears kara. Cheung is a marathon runner and he follows a very strict schedule. He is a photographer by profession. His schedule starts at 3:30 a.m. what is called ‘amrit vela,’ for prayers. Then he goes for running everyday.

Cheung serves meals ever Sunday as he is a part of Nanak Dev Ji’s free kitchen. Cheung knows that he is helping people and it makes him feel good. He has also written and published a pamphlet called “3 Facts about Sikhi” in Cantonese language.

When he was asked about how local merchants react to his beard and turban. He said, “They talk to me in English and when I respond in Cantonese, they are all big surprised.”

He is fluent in both Cantonese and Mandarin language because he was born and raised in Hong Kong. When Cheung saw a large crowd of people lined up for meals, “I thought, what’s going on? It’s not even welfare weekend,” said Cheung.

He further said that “Everyone can be a Sikh and believe in one God. “Live an honest life, help the less fortunate and do seva which is selfless service.”