Zee Cine Awards 2019: Malaika Arora did THIS when Arbaaz Khan walks in With Girlfriend Georgia 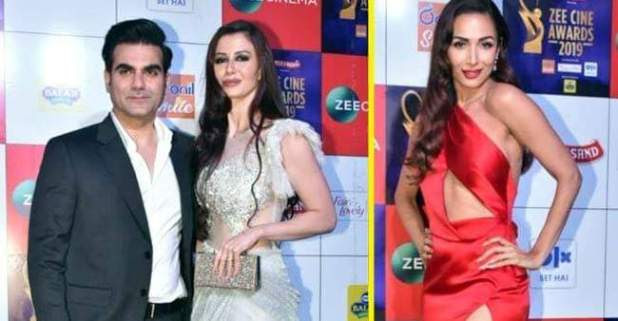 Yesterday Zee Cine Awards took place Bandra-Kurla Complex in Mumbai. Malaika Arora was among the first ones to enter the event. And soon after her it was her ex-husband Arbaaz Khan who walked in with girlfriend Georgia Andriani. As soon as Malaika Saw them she greeted them calmly. Moreover, she was also spotted hugging them. It seens that ex husband and wife are now happy in their lives with their new lovers- Georgia and Arjun Kapoor. It is being rumored that Arbaaz and Georgia may soon make it official by getting maaried. The night was a star-stydded event filled with fun and enjoymemt.

However, Arjun Rampal also walked in with hus girlfriend Gabriells Demetriades. Varun Dhawan also made a fabulous entry with his girlfriend Natasha Dalal. It us velieved that Varuj and Natasha will soon get married thus year. Interestingly, Arjun has also shifted in to live with Demetriades.Kartik Aaryan and Vicky Kaushal also graced the event. The actors also presented a fabulous performance. This is going to be the first time tgat the duo would be sharing the stage. The reports also suggest that Ranveer Singh will also be performing at the event.

Apart from the Varun Dhawan and Kiara Advani will deliver a duet performance to Varun’s blockbuster songs including Ishq Wala Love, Jeena Jeena and Sun Sathiya. Kriti Sanon will also be seen in a grand performance.