Video: Anushka pulling Virat’s Cheeks and treating Him as a child is the best thing on the internet 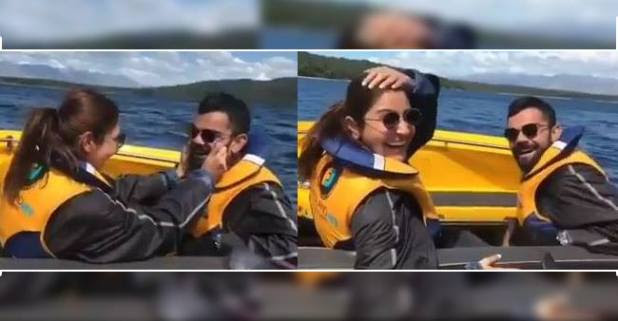 Anushka Sharma and Virat Kohli, the happily married couple are all set to give major love goals with the emerging pictures and videos surfacing on the internet.

On the recent note, another video of the couple is making rounds on the internet. We are vague with the dates when the video was shot but surely it must be from some of their earlier holidays in New Zealand Anushka and Virat along with a third person on the board of a boat are adventuring their ride. The actress is sitting on the driver’s seat along with the person driving and Virat is on the right side of the actress.

In the video, we can see both of them enjoying the drive. In the entire video, the most beautiful part was Anushka pulling off cheeks of husband Virat and we are just drooling over the video and watching it on a repeat mode.

Anushka took to her Instagram account and wrote, “Love is beyond and above everything. The only thing that’s real. It’s all-encompassing and beyond the reach of the mind. Happy Valentine’s day to all,” she shared the post on this Valentine’s Day.

One of the source said, “While Anushka will be traveling to England to be a perfect pillar of strength to Virat, she might not be going to the stadium with him. In fact, she wants to go separately to watch the matches and cheer the loudest for Virat. When the wives of the cricketers travel on tours, they usually travel on the same team bus. This time it seems Anushka, on match days, would be hiring her own car and bearing all costs to visit the stadium separately and there’s an extremely heartwarming reason behind this decision. They have discussed the huge media attention that is bound to be there for the World Cup and both want to keep all distractions at bay during the World Cup which Virat definitely wants to try and win for India. Both feel the lesser the distraction on match days, the more the mind will only focus on the match.”