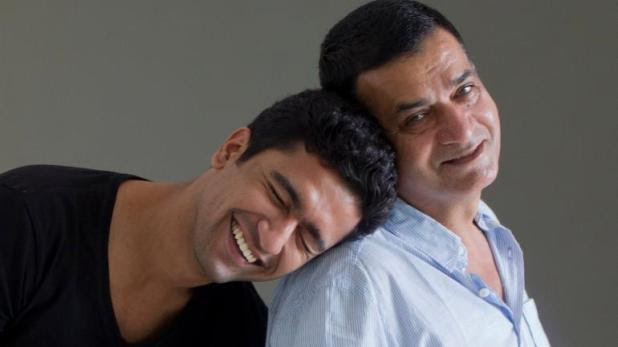 The Masaan fame ravishing actor Vicky Kaushal appeared on the voot talk show hosted by an award-winning fashion stylist, costume designer Anaita Shroff Adajania. She also works as the fashion director for Vogue India magazine. The actor appeared in the first episode of the show and talked openly about his personal life affairs.

Recalling his childhood memories Vicky said ” I got a taste of worldly matters in childhood itself. We were always shifting homes. One day, I went to my father sobbing, and telling him that I had been bullied by the kids of society. My father slapped me and told me that I would have to fight my own battles.”

Vicky is the son of Veena Kaushal and Sham Kaushal, an action director. He had won Filmfare award for best action. Walking down the memory lane he remembers another incident of 2015 when he was shooting for ‘Zubaan’ and he had to jump into an empty pool. His father’s assistants were of little help and asked him to just jump into the pool. Vicky turned towards his father seeking help which went in vain. His father paid no attention to his plea.

Vicky will be next seen in Karan Johar’s upcoming period drama ‘Takht’ starring along with Bhumi Pednekar, Ranveer Singh, Kareena Kapoor Khan, Alia Bhatt, Jhanvi Kapoor, and Anil Kapoor. And according to a report of a leading daily the two powerhouses of talents (Vicky and Bhumi) have bagged another meaty project, a horror thriller which will be directed by debutant director Bhanu Pratap Singh and produced by Karan Johar.