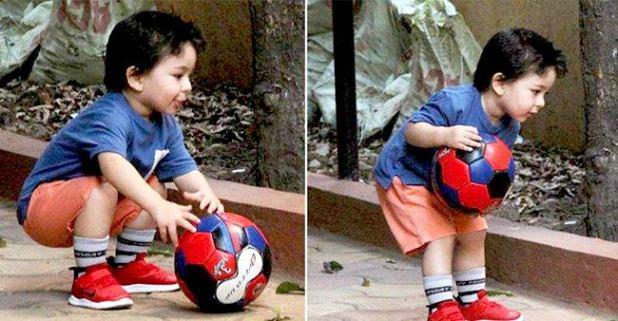 Taimur Ali Khan, the little munchkin of the Tinsel town is our favorite. Shutterbugs revolve around the adorable son of Saif Ali Khan and Kareena Kapoor Khan. Recently on March 15, 2019, another video of the cute little boy is surfacing on the internet. Take a look at the pictures and videos below:

Kareena earlier revealed, “I just don’t want him to be looked upon as a star-kid. I want him to grow up as normally as possible. I want to let him be just the way he is.”

She had said, “I think it is a bit much, but there is nothing that I can do about it. But I would want him NOT to have so much attention.”

“As parents, we do not say much, but we hope that he has as normal a childhood as I wanted him to have. Right now, he does not understand it (the media attention), but at some point, we will make him understand it,” she added to her statement.

In another interview, she was quoted saying, “I love doing nothing and being at home, just with my son, Taimur. But again, I also know that I can’t always do that. So, the idea is to find that balance. Strangely and honestly, I’ve found the perfect balance between my personal and professional life. For instance, if I’m working back-to-back for four-five days, I take the next two-three days off because I want that downtime. I need to have my family and friends around because my life revolves around them. I need to feel like a human being. I can’t treat myself like a robot because this industry and the atmosphere pushes you to become one. People are always on the go — if you’re not at work or a set, you’re on digital platforms like Instagram and Twitter or talking somewhere and giving your comments.”

Stay tuned with us.