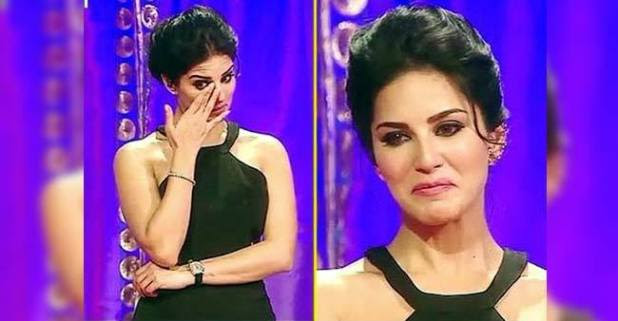 Sunny Leone, India’s baby doll made her entry in the Bollywood, leaving her past back but still sometimes the actress is taken back to her past with the flashback of the time she spends in her earlier profile. She is still constantly questioned and compared with her past experience prior to entering the B-town. But she has always said in her statements that she feels no regret for her past.

Recently she was once again brought up with the throwback of her work and this time the strong and resisting woman could not hold back herself and literally had teary eyes.

Recently during the launch of Arbaaz Khan’s new show called Pinch, Arbaaz Khan made revelations that he had asked questions to Sunny Leone which a social media user had commented on her timeline. The unconventional question made her hearts emotional and she wept on the show. With the aim to share and discuss the impact of social media users on their lives.

Arbaaz Khan at the launch event adding that the questions they have asked celebrities were taken from social media.”Everybody has spoken about interesting things about them. Sunny Leone has also spilled a lot of beans and she even cried on the show. Like there was a certain thing she wanted to answer and you could tell that somebody like her also could get affected and really be emotional about a certain question and about an answer. And she spoke beautifully and everybody else’s as well. Some have taken it humorously, some have taken it emotionally. So there have been all kinds of expressions that you will see in every episode with the celebrities.”