Shloka Mehta’s dance on Mehandi ceremony is not to be missed, watch video. 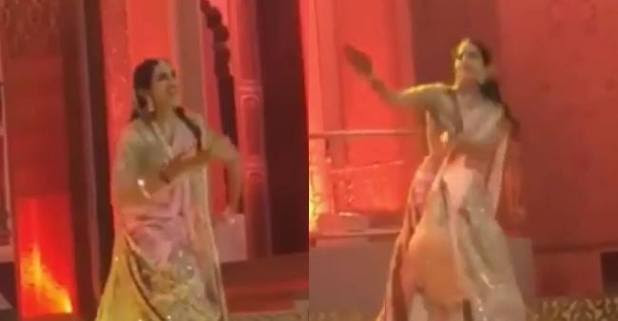 The Ambani’s and Mehta’s are grabbing every headline with the wedding of Akash and Shloka. From luxurious and sumptuous performances to palatable feast, the big fat wedding was all about the gathering of big wheel people around India and some special guest around the globe. Just like Isha’s wedding, the video and pictures from the wedding are surfacing around the social media platforms. Dancing on the beats to the performance of rockstars and special guests, the function was a dream wedding for everyone.

Now another video from the wedding performances is making round on the internet, it’s none other than the ‘beautiful Dulhaniya’ shaking legs on the beats.

The video clip of Shloka Mehta went viral on the web and in no time started gathering likes and comments from viewers around the country. The gorgeous bride is dancing on the hit track of Shah Rukh Khan and Anushka Sharma song ‘Tujh Mein Rab Dikhta Hai’ from the film Rab Ne Bana Di Jodi. Well, we guess the video is probably from her Mehendi ceremony as we have seen her Mehandi pictures earlier also. Just take a look at the video:

The star-studded wedding had many glittering stars present at the gala wedding eve. While from the business world, prominent business personalities of the country, including Ratan Tata and political leaders including Smriti Irani and Praful Patel, the event saw the attendance of several Bollywood celebs including Amitabh Bachchan, Shah Rukh Khan, Aishwarya Rai Bachchan, Alia Bhatt, Priyanka Chopra, Disha Patani, Tiger Shroff and many more stars from the glamour world.

The wedding will be followed by a lavish reception bash today, followed by another one of 11th of March. Stay tuned and we assure you to bring all sneak peek on the same scoop. Share your comments with us on the same.