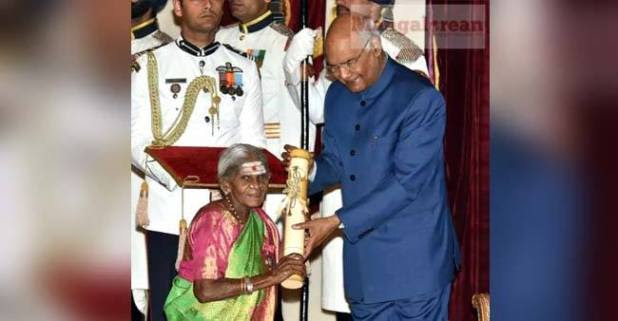 It was a wonderful moment in the Rashtrapathi Bhavan when a 106-year-old Padma awardee blessed the honorable President, Ram Nath Kovind.  The president who is 33 years younger than Thimmakka asked her to turn towards camera and what she did next left the entire hall of people in smiles.  The 106-year old, who was given the title of ‘Mother of Trees’ stretched her hand out to bless the President of India at the awards ceremony.

Her motherly move towards the president brought 2 inch smiles on the faces of the President, Prime Minister and all the guests present over there.  Rashtrapathi Bhavan follows a strict protocol, however the motherly instinct of Thimmakka is applauded by everyone. She was awarded Padma Shri for planting thousands of trees in Karnataka.  She earned the title‘Vriksha Mathe (mother of trees)’ for planting 8,000 trees including over 400 banyan trees. Thimmakka was dressed in a light green sari and stepped on to the stage to receive the award with a smiling face.  Her determination to plant numerous trees in the state of Karnataka is considered worth Padma award. Her story as to why she started planting trees is quite interesting and moving.  She wanted to commit suicide in her 40s as she couldn’t conceive and that is when her husband suggested her to plant trees. She found solace in doing so and continued doing it till date. 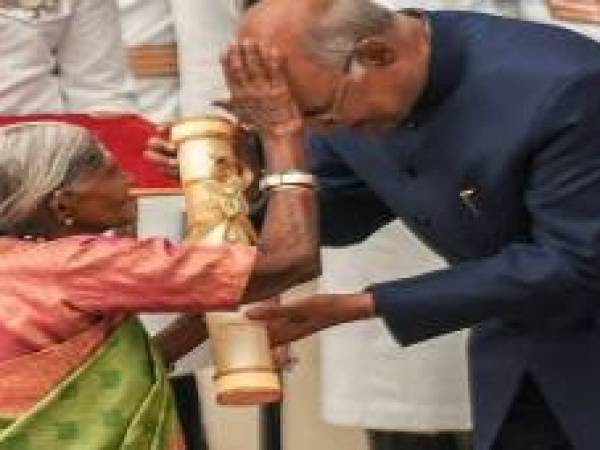 She and her husband worked hard in the fields all the day just to plant the trees and care for them.  They started with 10 plants in the first year and went on planting more number of saplings year by year.  There were times when they even walked over 4 kilometers to bring water for their plants. Thimmakka was born in the village of Hulikal in Karnataka.  Till date she planted over 8,000 trees during a period of 65 years. She lost her husband in 1991.

Even after her husband death she kept on planting trees without halt.  Her determination to plant the trees is what made her plant thousands and thousands of trees.  Her small move now turned into a big mission and her hard work was recognized by the Indian government.  Thimmakka was awarded the prestigious Padma Shri award for her outstanding service for the country by planting thousands of trees.