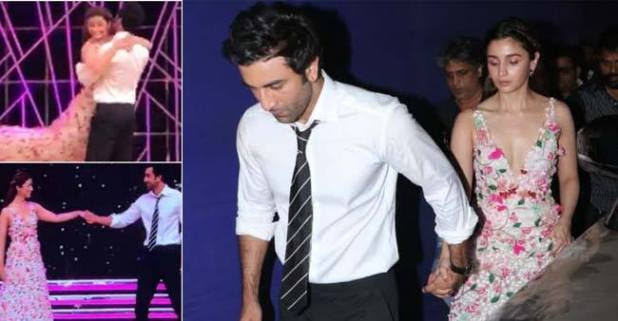 Bollywood buffs’ and TV audience’s most awaited events are the award functions which leave us with our much needed glam dose. One such event, the Zee Cine Awards, was held in Mumbai on March 19, 2019. The event witnessed who is who of the Bollywood. Not to miss amidst this humongous star studded event are the recent Bollywood love birds Ranbir Kapoor and Alia Bhatt who carried away the light for the night. Both the stars reached the event for they had been in the nominations. Ranbir kapoor for his film Sanju and Alia for her film Raazi for the year 2018.

During the course of the event, there came an eye candy video of Ranbir and Alia grooving to the tunes of Ishq wala love from Alia’s debut movie Student of the year. It was heart-warming to see them shy and sly, so much happy in love. The dance would have set the stage on fire if not for the cheerful anchors Vicky kaushal and kartik Aryan copying their moves on the other stage.

Rumours have been rife that Alia and Ranbir were seeing each other, which were confirmed by the Raazi actress on the Koffee with Karan show. From then it was out there for everybody to swoon over the actors’ PDA.Be it a pic of their group outings, or their arrival at a wedding reception, or their cosy pictures with families, each pic one at a time leaves you fawning over the IT couple.

Bollywood heads have taken to it that the actors would be tying a knot soon. However, both the actors while admitting love for each other, consider the relationship to be in it’s prime and would love to dedicate more time and thought for the same. On the professional front both the actors are leading in their arenas. Before their real life union, the fans are going to get a taste of their reel life union as the duo are working in the film Brahmastra directed by Ayan Mukerji.

Apart from that Alia is also part of Karan Johar’s prestigious project kalank co-starring varun Dhawan,Aditya Roy Kapoor, Sonakshi Sinha,and few others in lead roles. Meanwhile, Ranbir is working on his upcoming project Shamshera, starring Vani Kapoor on his side along with Brahmastra.