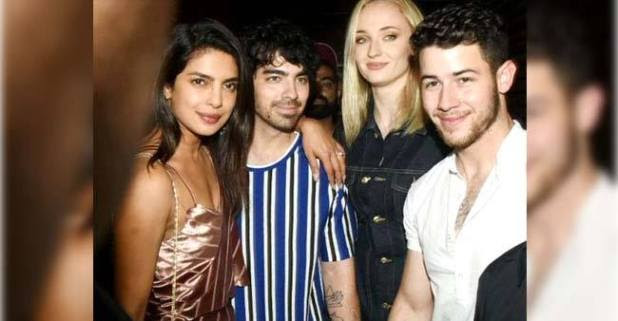 The Jonas brothers are overwhelmed with the success of their latest song Sucker and this time we think the respective partners have been quite lucky for the boys as their song spot Number 1 on the coveted, Billboard Top 100. You heard it right, the song which released on 1st of March stood 1st position in the list of Billboard.

The song features Nick Jonas, Joe Jonas, and Kevin Jonas after a period of six years while along with the cute brothers the song features their respective partners Priyanka Chopra, Sophie Turner, and Danielle Jonas. The song garnered 3.6 million likes and is trending in people’s mind these days.

With such accolades for the song, newlywed Priyanka Chopra is in a state of blissful happiness with the positive reviews the song is getting. The global star took to her Insta story this morning and wrote, “The Jonas Brothers debut at No. 1 on Billboard Hot 100! OMGeee!! I could not be more proud of you guys (screaming inside)”. Take a look at her post below: 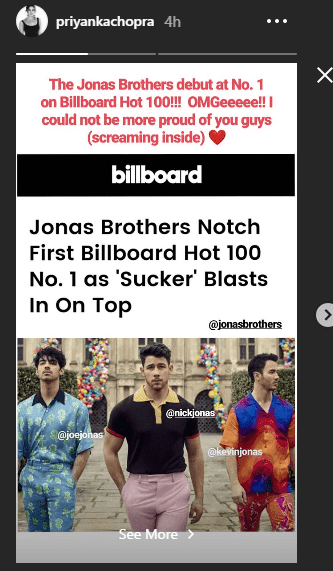 In the recent picture shared by Nick Jonas on his personal account, he wrote,”I’ll sleep well tonight knowing #sucker is number 1.”

While another of his post, Nick penned down his thankful note for the audience who liked the video and made it win on the list, he wrote, ” This is unbelievable. My heart is so full of gratitude. There was a time I wasn’t sure if I was ever going to be able to make music with my brothers again, let alone have a number 1 song on the Hot 100 on Billboard. Thank you to every single person who downloaded, streamed and listened to sucker on the radio. This still feels like a dream, and the best part is is that it’s just the beginning of this incredible new chapter. ”

Kudos to the team of Sucker…