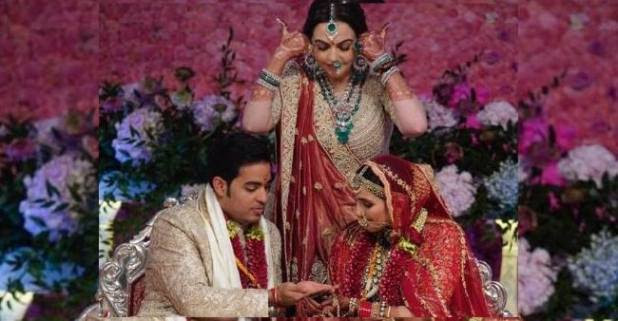 Mother and her unconditional love are incomparable and when her children are stepping into a newer phase of life, it’s even more emotional. The similar thing happened with Nita Ambani when her oldest son Akash Ambani got married to his childhood friend Shloka Mehta yesterday. The pictures from the wedding gallery are floating on the internet and among all, we found a picture where the back of Nita’s blouse had a special detailing of embroidery which is all dedicated to her son and daughter in law, along with that Nita’s dress had ‘Shubhaarambh’ written in the center along with Akash and Shloka’s name on the sides.

Take a look at the other pictures from the wedding:

The overwhelmed mother was glittering on the wedding day on every picture of her. Apart from the happy mother, father Mukesh Ambani was seen wearing Sherwani with wife Nita Ambani. The joyous parents looked enchanting enjoying every ceremony of their son’s wedding.

The adorable couple tied knots at the Bandra Kurla Complex. The venue is near the distance of the school run by Ambani’s family. It’s the same school where Akash and Shloka studied together. Right from their school days, they had a good friendship which finally turned into nuptial relation on 9th of March.

Earlier the family celebrated the pre-wedding festivities along with big celebs from the glamorous world. The Swiss town had almost 500 guests as the festivities started from 23rd February to 25th. Ranbir Kapoor, Karan Johar, Alia Bhatt graced the bash with their dynamic appearances.

Tonight the Ambanis and the Mehtas will be hosting a wedding bash of Akash and Shloka in Mumbai and on 11th of March another reception for the newlyweds will be hosted in the city.

Don’t miss any updates from Laughing Colours. Stay tuned to this space.