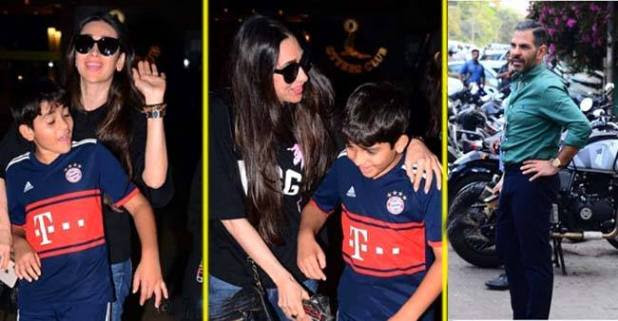 Sunjay Kapur and Karisma Kapoor ended up their relationship but there is no space for holding grudges for each other. Todays’ time is all about moving ahead in life without any regret in the past. The ex-couple who legally got separated in 2016 and are the parents of two children Samaira Kapoor and Kiaan Raj. Sunjay and Karisma proved that they are absolutely mature enough to tackle all the situations in their life regarding their children.

The divorced couple often comes together for lunch/dinner outings or birthday celebrations of their children, Samaira Kapoor, and Kiaan Raj Kapoor. While the children also share a warm and healthy bond with their step-mother, Priya Sachdev Kapoor. Recently on March 11 and 12, 2019, Samaira and Kiaan stepped a year ahead respectively. Mother Karisma had enjoyed the bash of Kiaan’s 9th birthday at the posh club in the suburbs of Mumbai.

The birthday bash was graced by Karisma Kapoor’s parents, Randhir Kapoor and Babita, her BFF Amrita Arora with her son and Malaika Arora had a blast of a time at the birthday celebration of Kiaan Raj Kapoor’s 9th birthday. Among all the most surprising person was Karisma’s ex-husband, Sunjay Kapur, who went forward to pose for the Paparazzi. Here are pictures from his birthday bash:

Well, this is not the first time, Earlier in the year 2018, the parted couple Karisma Kapoor and Sunjay Kapur joined the company to celebrate their daughter Samaira Kapoor’s 13th birthday and made the day even more special for her. The past birthday photos pictures went viral on the internet in which Sunjay and his daughter Samaira. Though the couple is no more together, their understanding of upbringing their children is way too mature. Karisma and Sunjay married in the year 2003 and later there not so well going relation ended legally in the year 2016.