Actress Sridevi’s daughter Janhvi Kapoor and Shahid Kapoor’s brother Ishaan Khatter stepped together in the Hindi Film industry with director ShashankKhaitan’s film Dhadak. Dhadak was the remake of super hit marathi film Sairat. Both the actors became best pal of each other since they started the shooting of the film. Rumours are also riff that they are dating each other. Although, they have never accepted the rumours.

The duo also share their pictures very often and paparazzis never miss a chance to capture them. In the row, the boy recently took to his Instagram story and shared a sweet of video of Janhvi trying her hand in cooking. He captioned the story: “Chef Janhvi. All rights reserved.”

The video sees actress wearing a cute grey top and a printed skirt with a sling bag. Watch the video right here:

This season of Karan Johar’s chat show Koffee With Karan saw the debut of Dhadak actors. Janhvi appeared in the show with her brother Arjun Kapoor. While Ishaan came with his brother Shahid Kapoor. When Karan asked Janhvi about dating Ishaan, she said that Ishaan is just a good friend. Also, Ishaan had the same answer when he was on the show.

As we know, Janhvi appeared with Arjun who is her father’s son. When Karan asked Arjun about the dynamics he shared with Janhvi and Khushi, Arjun said,  “A moment changes everything, I have been through that moment, I wouldn’t wish it on my worst enemy. I and Anshula did everything out of pure honesty because we knew that we would have needed somebody at that time. We couldn’t have that but that doesn’t mean Janhvi and Khushi shouldn’t. My mother would have wanted that. If she was alive, the first thing she should’ve said is, ‘Go be there’. Don’t hold any grudges; life is too short.” 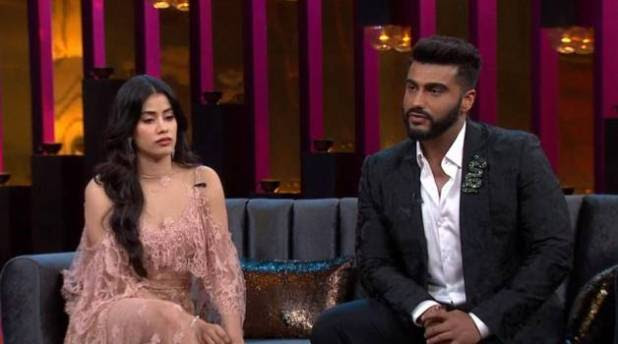 “It took me a lot of courage to ask Anshula, ‘I think this is the right thing, what do you feel?’ It was 2 am in the morning and when I told her, the first thing she asked was, “Where are the girls?,” he added.

Talking about the work front, Janhvi will be next seen in ‘Takht’ which is a Gunjan Saxena biopic and ‘Rooh-Afza’.