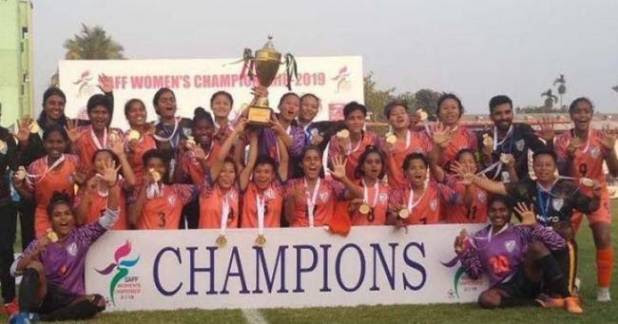 India lifted the fifth SAFF Women’s Championship title on Friday in Biratnagar, Nepal. The country won the title with a 3-1 over the hosts Nepal in the final. Goals from Dalima Chhibber, Grace Dangmei and substitute Anju Tamang saw India lift the trophy in front of a partisan crowd at the Sahid Rangashala Stadium.

India has reached an unbeatable record of 23 matches in the history of the tournament from the win of this title. In the victory of India, Dalima Chhibber, Grace Dangmei, and substitute player Anju Tamang scored goals. The Indian team maintained their dominance throughout the match and did not give any chance to return to Nepal.

That #FridayFeeling when you win the SAFF trophy for the 5⃣th time in a row!

The Indian women team has put the hosts under pressure since the beginning of the game. Indian goalkeeper Aditi Chauhan did a great defense on Manjali Kumar’s shot in the 14th minute. After three minutes, Sanju’s powerful shot was saved by Nepal’s goalkeeper.

Dalima scored India’s first goal in the final. She took the powerful shot from 30 yards and stunned the Nepali goalkeeper. Ratan Bala Devi could double India’s lead after six minutes but her shot was saved by Nepali goalkeeper.

5⃣ consecutive SAFF titles for the Indian women in a row.

: We are the champions (@QueenWillRock)

In the 34th minute of the match, Sabitra scored the equalizer for Nepal with the header. In the second half, Sanju and Ratan Bala showed great synergy and repeatedly hit the box of Nepal and got the advantage in the 63rd minute. Then Grace scored the second goal.

The Women’s team clinch their 5⃣th straight SAFF Title after a tough game against the hosts.

Anju proved the coach’s decision to take her in place of Sandhya right as in the 78th minute she scored India’s third goal. India won the SAFF trophy for the fifth time

When everyone is busy in elections, the women football team made the country proud. This is a great achievement of the women’s team and they deserve the attention of the nation.