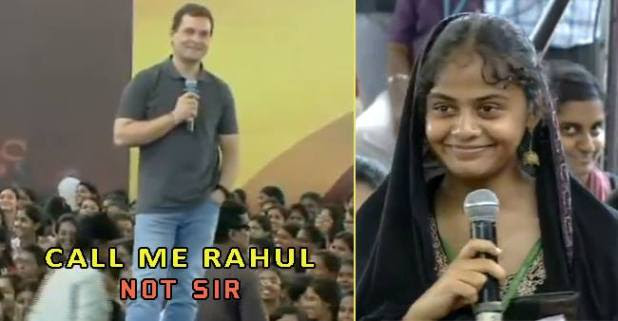 Lok Sabha elections are just near to the dates and all the party leaders are out for promotional events to win the trust and favor of the people around.  In the advertisement campaign, the recent incident that happened at the Stella Maris College in Chennai is peculiar in its own way.

Congress President Rahul Gandhi who is popular for his own hilarious deeds has once again turned us laughing. During the campaign, Rahul surely made his appearance worth noticing. He would definitely have won over a group of college girls at the Stella Maris, with his presence. I understand it must be difficult for many of you to digest but yes it has happened at the college.

It was the time on stage, Rahul asked a few questions from the girls seated below. At the session, when one of the girls asked him question referring to Rahul as ‘Sir’, the man came up with the sweetest of interruptions. Pausing the girl from her question, Rahul asked her to call him ‘just Rahul’. Take a look at the video going viral on the internet.

“Can you call me Rahul instead of Sir? Makes me more comfortable,” he said in between. The statement went on viral and is surfacing on the internet.

“Town Hall with the students & teachers of Stella Maris College in Chennai this morning. Tough questions, great energy, amazing college! When will our PM start taking honest questions from our,” captioned the image on his official account…

A snap from the even that was shared by Rahul on his Instagram handle has all of his followers along with him, “A few more pictures from yesterday’s Stella Maris Town Hall”

Another picture from the event that was shared by Congress President on his official Instagram account, “This picture that was presented to me yesterday, brings back memories of a very difficult time in my life…”