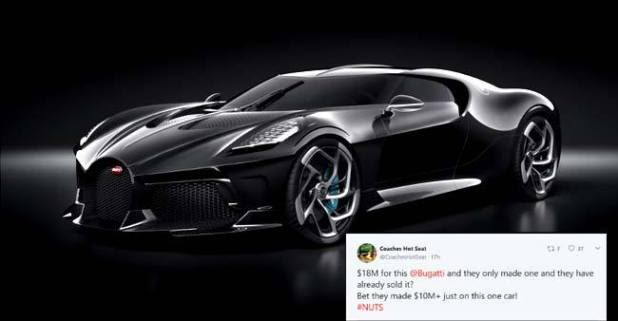 Buggati has just unveiled the ‘Bugatti La Voiture Noire’, and at $18m it’s the most expensive new car in the world. Bugatti President Stephan Winkelmann said in his statement, ” La Voiture Noire at the Geneva Motor Show 2019. For €11 million (before tax) this unique car has already been sold to a Bugatti enthusiast. It is the most expensive new car of all time. However, Bugatti President Stephan Winkelmann has said at the Geneva show that the car was sold for €16.5 million (after tax) which is equivalent to Rs 132 Crore. It is a sculptural beauty with unique technology, the ideal Grand Tourism.”

As per the reports, “Our history is both a privilege and a responsibility – the responsibility for continuing the Bugatti heritage into the future. With “La Voiture Noire”, we are paying homage to our heritage and bringing speed, technology, luxury, and aesthetics forward to a new era,” said the president Stephen. “La Voiture Noire is a far more than a modern interpretation of Jean Bugatti’s Type 57 SC Atlantic. It is a feast of aesthetics,” he added.

Bugatti designer Etienne Salomé said in his statement, “Every single component has been handcrafted and the carbon fiber body has a deep black gloss only interrupted by the ultrafine fiber structure. This is a material that has been handled perfectly.”

“We worked long and hard on this design until was nothing that we could improve. For us, the coupé represents the perfect form with a perfect finish,” he added.

Apart from the designers and manufacturer, the reaction of Twitterati’s on the launch of the vehicle is worth reading. Take a review of the tweets here:

$18M for this @Bugatti and they only made one and they have already sold it?
Bet they made $10M+ just on this one car! #NUTS https://t.co/W0fvPA7QS9

Bugatti just unveiled the Bugatti La Voiture Noire, and at $18m it’s the most expensive new car in the world pic.twitter.com/bUWt9WfkIm

What are your comments on the same, share in the comments section below.