The new behind-the-scenes video of Sucker starring Nick Jonas and his wife and actor Priyanka Chopra became viral on the internet. In the video, one can see entire Jonas clan—Nick, Joe and Kevin Jonas with Priyanka, actor Sophie Turner, and Kevin’s wife Danielle.

In the video, Nick is seen chilling in a bath tub while sucking a lollipop. Talking about this, Nick said, “As you can see I’m currently bathing in bath tub out in the sunlight at a castle. It’s a usual day for me. But I’m sure it is not for you.” The video captures the locales of the New Years in England which is the same castle where Olivia Colman’s The Favourite was lately shot.

In the behind-the-scenes video, PeeCee can be spotted roaming around the sets donning a beautiful big yellow dress. The Jonas brothers are seen trying out the costumes or getting their hair done. The newly married couple can be spotted cuddling with each other.

Talking about the song, Joe said, “This song is about being hopelessly in love and you’ll do anything for the person.”

In the video, Nick’s wife Priyanka and Kevin’s wife Danielle are seen petting some rabbits and corgis. Later, everyone joins them for a tea party in the garden and a fancy dinner. Anthony Mandler is the director of video and is seen giving direction to them. Later gives a final sign off: “That’s a wrap!” 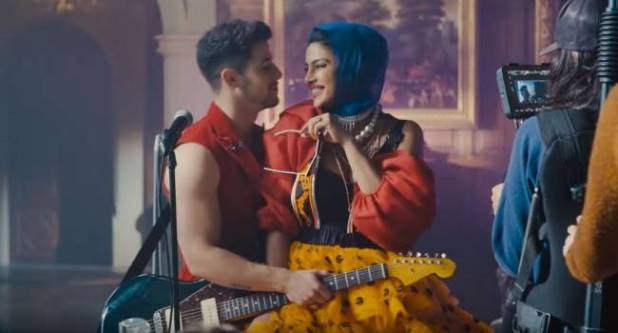 Since the Jonas Brothers’ band split, Sucker is the first Jonas Brothers song and it climbed several music charts after its release. PeeCee posted pics of the Billboard Hot 100 plaque and they revealed in an interview on The Elvis Duran Show that: “they have recorded “30 to 40 songs” that they “can’t wait to release.”

The actress also posted a picture and confess her love for the husband. Priyanka posted pic on Instagram on Thursday in which they are seen gazing into each others’ eyes with big smiles on their faces. She wrote: “To live for days like [email protected] #boatlife,”

Nick and Priyanka are currently in Miami where Nick is shooting for a second Jonas Brothers music video. The band came back together last month.