Anushka Sharma and Virat Kohli headed to Bengaluru, airport video is surfacing on the internet 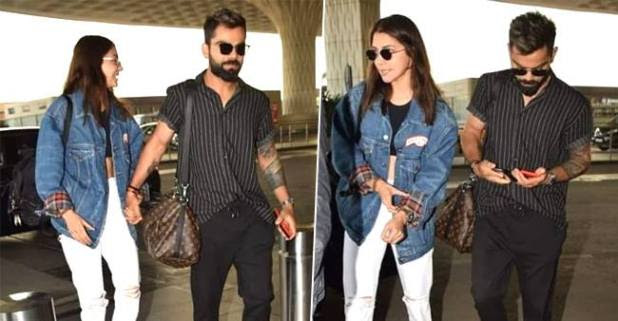 Anushka Sharna and Virat Kohli, the power couple who has always made sure to engage the audience in their day to day life activities. The couple whenever made public appearances make sure to create buzz around the media. One of the most lovable couple on social media is out to make another headline. Read inside…

Recently the couple was spotted at the Mumbai airport, on their way to Bengaluru. The video clip, now online, the couple is seen walking towards the airport. In casual attire, the couple looked happily enjoying each other’s company.

Just a couple a days ago, another video of the couple went viral on the internet from their trip. In the video,  Anushka is seen pulling Virat’s cheek indulgently, while on a boat trip, was enthusiastically shared by her fans. We are still not over gushing about the video.

Earlier few months, Anushka had a hilarious interaction with American singer-songwriter Julia Michales who is a lookalike of the actress.

Even the singer Julia, who had reached out to Anushka and had written on Twitter in early February this year: “Hi Anushka Sharma apparently we’re twins lol” sharing a collage of the two of them.

Anushka also shared an epic reaction to her lookalike. “OMG YES! I’ve been looking for you and the remaining 5 of our doppelgangers all my life,” Anushka had replied to Julia’s tweet that garnered huge attention.

The 30 years old actress is soon producing a feature for Netflix named Bulbul. Speaking about her future plans, she said, “The best situation for me to be in – as an actor as well as the audience – would be to watch a film which is entertaining but it must also leave some thoughts – in a very subtle manner – in your mind to ponder over.”

For more scoops and updates, keep reading with Laughing Colours.