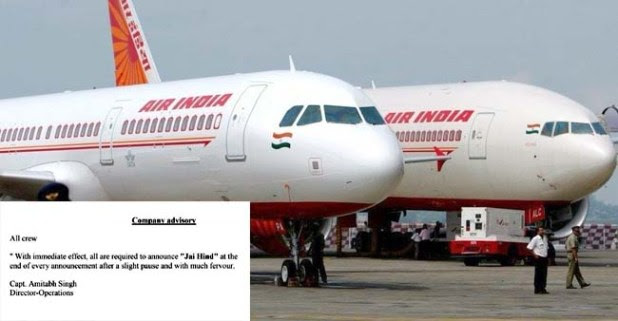 The new rule to invoke patriotism among the people is announced by Air India, now the crew will have to utter “Jai Hind” after every announcement of the respective flights. An official advisory of the National Carrier said on Monday.

“With immediate effect, all (crew) are required to announce ‘Jai Hind’ at the end of every announcement after a slight pause and much fervor,” in a statement by the advisory issued by Amitabh Singh, Director Operations, Air India.

Hearing this, the reaction of Twitter users on the same announcement is worth mentioning. Take a look at what people have to say on the same.

“Air India regret the delay in the departure of your flight” …(slight pause) … “Jai Hind”?

First, a demand that audiences in cinema halls stand up for the national anthem, and now this! All Indians love India, national sentiment comes naturally. No need to force feed nationalism down our throats! India deserves better ! https://t.co/L2VxdV3JtM

As per a new order Air India crew have to say ‘Jai Hind’ after every announcement on all flights. Please don’t forget to salute if you see one flying in the sky.

Air India crew already say Jai Hind at the end of their announcement especially when pilot communicate with passengers. What is new in it?

The Air India’s Chairman and Managing Director, Ashwani Lohani had issued some rules to the pilots in May 2016. “The captain of a flight should often connect with passengers during the journey and, at the end of the first address, using the words ‘Jai Hind’ would make a tremendous impact,” Lohani said in a communication to his staff in May 2016.

Lohani said in a statement, “The cabin crew should greet the passengers while emplaning and deplaning with a ‘namaskar’ as was the tradition. A smile on the face and conversing sweetly and politely without an iota of irritation would be a good thing.”