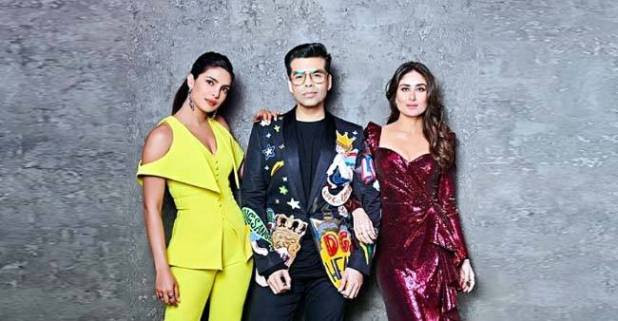 Recently, Kareena Kapoor Khan and Priyanka Chopra Jonas graced the most happening couch of Koffee With Karan Season 6. The duo had made sure that the fans will love this reunite after so many years. The two most talked Divas of Bollywood talked about everything on the chat show where Karan Johar also didn’t leave any question for them to answer. The episode was obviously all about humour and utmost wit. From Taimur’s popularity to how Jonas proposed PC in Greece, we have seen it all in their description.

Let’s talk about the best moment from the KWK where Bebo and Piggy Chops revealed almost everything and made the fans gush about this reunite forever!

Talking about Taimur’s popularity with the paparazzi, Karan being a father to Yash and Roohi came up with the subject of how receiving attention at such a young age was harmful to a kid. “I was discussing with Saif as well that Taimur has become a national topic, and it may not be a good thing because he will start believing that the world exists only to take his picture,” he divulged. “So tomorrow if his photo is not taken, he might slap me or slap the paps like, ‘Where’s my picture?’,” quipped Kapoor Khan and added, “He waves back because he understands that everybody is calling him, ‘Taimur, Taimur.’ He is a friendly child, but of course, we are scared about it. I can’t stop him from going out or going to playschool. I can only request the paps to not take his picture.”

And Bebo gave the best answer on Taimur’s famous lookalike doll where she proclaimed, “I’m sorry to say, but that looks like Chucky The Doll and doesn’t look like Taimur Ali Khan at all. It has strange blue eyes, some scruffy hair and a Bandhgala which does not make him my son.”

Coming to Hollywood star, Priyanka talked about the definition of feminism and backing up Kareena she said, “As women, we have the privilege of having children, and it is all about prioritizing. Even if your priority at some point of time becomes the work you are doing vis-a-vis raising children or being a homemaker, that is what feminism stands for—the choice that you get to make”.

During the shoot of ‘Chaliya Chaliya’ from Tashan Bebo revealed that she never saw it coming. Recalling the same, she said, ‘He woke up one morning and said, ‘I want to spend my life with you, and I will never have it any other way’”.

Even Nick Jonas Proposed Chopra in Greece and telling the story, PC reminisced, “It took me 45 seconds to say yes, because at that point, we had dated just for two months. He was on his knees, and he had this big Tiffany box inside which was another box. He went over with his brothers to pick the ring and shut down the entire Tiffany store,” she giggled even as Johar prodded Kapoor Khan, “Did Saif ever do anything like that for you?” “No, he hasn’t shut anything down for me,” she pouted, before adding, “But he did give me a palace, so that makes it alright.”

Apart from sharing a common EX, PC and Bebo got to know that they were both proposed to in the same place!

The two Divas have completed more than 2 decades in Bollywood, where PC made a transition to Hollywood. They both have come a long way. Kapoor Khan raved, “It’s a new fearless version of her that I see. But I don’t think I have that ambition in me to make it in Hollywood; I am happy with what I have here.” At which point, her couchmate questioned, “Why is going to Hollywood the greatest benchmark of life? Sure, it is an expansion of yourself, but it has involved no sleep and no food.” “See that’s why I can’t do it. I need sleep and I need food,” the 38-year-old laughed.