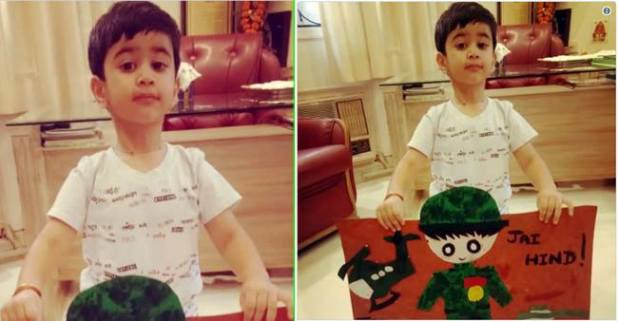 Well-known TV maker Ekta Kapoor, who is known for helming television serials including Naagin, Kumkum Bhagya, Kasautii Zindagii Kay, Kundali Bhagya and some more, as of late turned into a mother to a baby boy. Ekta embraced motherhood through surrogacy and named her son Ravie, inspired by her daddy Jeetendra genuine name. However, Ravie isn’t the main young man in the Kapoor family. In 2016, Ekta’s sibling, Tusshar Kapoor additionally had his child, Laksshya through surrogacy.

As of late, the maker took to her social media handle to impart a photograph of her nephew. In it, Laksshya is seen holding a depiction, which was obviously drawn by him. The young man drew a helicopter, a soldier, and composed ‘Jai Hind!’ on it. The new mommy in town tapped the delightful picture and inscribed her post, “My boy!!! Got his SALUTE right! #JAIHIND.”

My boy!!! Got his SALUTE right! #JAIHIND pic.twitter.com/qaZUJrZG3e

Tusshar had a select discussion with us about turning into an uncle to child kid Ravie. The performing artist was cited as saying, “I’m excited to announce the arrival of my nephew, a baby boy named Ravie, born last week through IVF and surrogacy. Ekta is a very family oriented person and has been like a mother to my son Laksshya! This marks the beginning of a new phase in her life, an exciting time of completeness and fulfilment! God bless Ravie with a life of peace, happiness & good health.”

Recently, the maker posted a photograph on her Instagram account in which Laksshya is seen watching his child sibling by remaining close to the lodging. Sharing the image, Ekta stated, “Big brother is watching!!!”