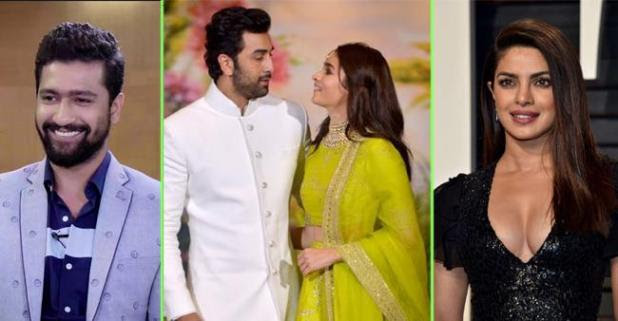 Love is in the air and this Valentine’s it’s quite special for the lovebirds of B-town. To paint the town red these Bollywood celebrities are fully prepped up for Valentine’s Day on this 14th Feb. From Ranveer Singh to Kapil Sharma, the celebrities are personifying the art of love.

The actor was asked about his Valentine’s plans during the promotion of his upcoming awaited film Gully Boy. The actor said he will spend the day with Deepika and he will take her to watch Gully Boy’s evening show.

The newly married Priyanka Chopra has beautiful plans with husband Nick on their post-wedding first Valentine’s. Both of them earlier had no plans for their first Valentine’s but finally, the two decided to spend a couple of days together.

“I’m going to be in London because Nick is going to be working in London so I am going in for two days to hang out. I’m not a believer that you need a day to tell someone you love them, but it’s always nice to hear it. We didn’t put too much pressure on it, she said.

“We’re not supposed to be together this Valentine’s Day because I was working in LA and he in London, but things moved so I am glad we can spend that time together. The pressure does not exist – he’s thoughtful and sweet all the time,” she added.

Reportedly Alia and Ranbir are dating each other and during the promotion of her upcoming film Gully Boy, the actress spilled the beans on celebrating Valentine’s Day. The 25 years old actress said that she doesn’t have any special plans but she would spend her day along with Ranbir on the sets of Brahmastra. She said, ‘I will celebrate this with’ Amitabh Bachchan and Ayan Mukherjee on ‘set of Brahmastra’ on Valentine’s Day ‘. She did’not mention Ranbir’s name but his presence on the sets is obvious.

Reportedly the Uri star Vicky Kaushal is dating TV actress Harleen Sethi and talking about his thought on Valentine’s he said, “I don’t believe in giving one special day to love as its very beautiful emotion and for that, just one day is not enough. So, I guess every day should be celebrated as Valentine’s Day.”

Kapil Sharma was present at an event and was at his candid best. Kapil was asked about his Valentine’s plan and the comedian-actor said that the question should be asked to those who are unmarried and his job is done, now that he is married. But we are sure Kapil would have planned definitely something extra special for Ginni.

Love and be loved, a very happy Valentine’s to all the folks around.