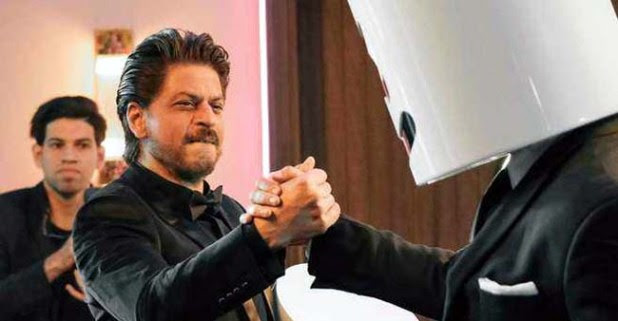 SRK is not just an actor, he is a ‘brand’and the world’s most popular star. There is no second thought that Shah Rukh Khan is a better marketer than actor and features in the promotion and endorsement of many leading brands. Not only in India, but SRK is also loved by millions of his fans worldwide and wherever he goes his charm automatically arises among his fans. His aura is something beyond our imagination and his craze among his fans is just on a whole new level.

Now, one of the American music producer Marshmello has come to India to release his new music video. The song is composed by renowned Bollywood musician Pritam Chakraborty and titled as BIBA.

In the clip, Marshmello is seen paying his heartfelt tribute to King Khan by doing signature steps of the superstar from his super hit movies names including, Dilwale Dulhania Le Jayenge, Kuch Kuch Hota Hai, and Dil Se. The video is making rounds on the internet as it has some amusing twist. The most noticeable part is Shah Rukh’s presence in the video at the end. Take a look at the clip:

Marshmello posted a small glimpse from the music video on his Instagram with the caption, “Anytime I’ve ever come to India I’ve always felt so welcomed like it’s home. I’ve always been so fascinated by the rich amounts of culture throughout the country. This is why Biba means so much to me because I was able to create something with Pritam official and Shirley Setia that I’m so proud of and I hope everyone can appreciate the time and effort that went into this…”