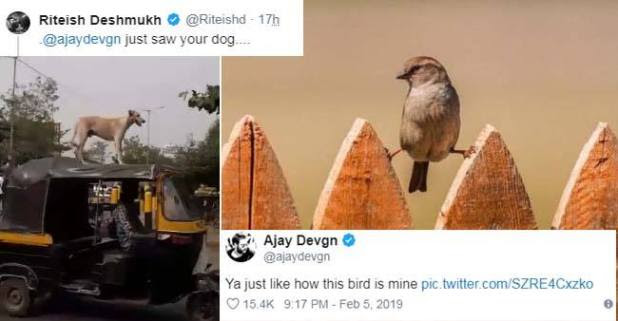 Ajay Devgn and Riteish Deshmukh are currently working for their upcoming film Total Dhamaal which is the third instalment of the Dhamaal series and actor Ajay Devgn recently shared a picture from the sets of the movie along with the director Indra Kumar and there was something worth noticing in the picture.

The duo in the photo are posing exceptionally well on the camera, but if we zoom in between, we get to see Masti actor Riteish Deshmukh who in the back looked like a bearded old man. Ajay took a jibe with his co-actor Ritiesh and wrote a caption in Hindi which could be read as, “Peeche Ye Dhaadhi Wala Baba Kaun Hai”

Further, Ritiesh also teased him with another post, the Masti actor shared and mastikhor video which is just taking rounds on the internet. The actor shared a TikTok video and captioned the video as “Ajay Devgn just saw your dog”

While the conversation thread goes on unstoppable, Ajay again retweeted his post and wrote down, ” Ya just how this bird is mine,” the Singham actor responded hilariously.

Ya just like how this bird is mine pic.twitter.com/SZRE4Cxzko

The two have been sharing screens from many projects together and again with a dose of laughter they are back with the third edition of the comedy movie Total Dhamaal. The hilariously mad movie helmed by Indra Kumar is all set to hit the theatre on 22 February.