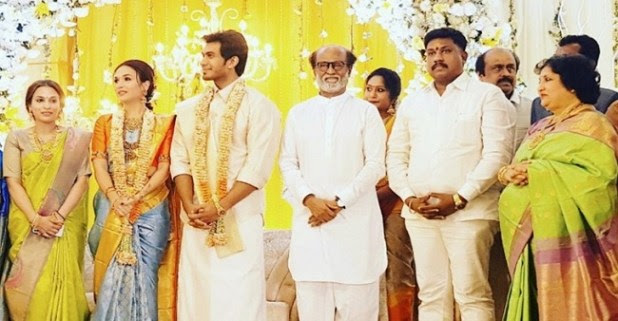 The Tamil superstar Rajinikanth is on cloud nine as his adorable younger daughter Soundarya is all set to tie knots with beau Vishagan Vinangamudi. The twosome will soon be together into a blissful marriage on the 11th of February. Vishagan is a businessman actor, whereas Soundarya is professionally an Indian graphic designer.

Before the marriage ceremony, the pre-wedding festivities have already been started and an intimate pre-wedding reception took place whose pictures are surfacing on the internet. Take a look at the pictures:

The ceremony started spiritually with the Sumangali Pooja and then the intimate reception at the Raghavendra Mandapam in Chennai’s Kodambakkam, while the special wedding will be held on 11th Feb at Leela’s Palace in Chennai.

Though the pre-wedding reception ceremony was quite a private bash, the pictures from the festivity are making rounds on the internet. On looking at the photos, Soundarya looked extremely delicate and beautiful silk Sari in a combination of blue and red. The powerpack daughter tied her hair in a bun and her simple look was just icing on the cake.

Talking about the professional front, Soundarya Rajinikanth directed Velaiilla Pattadhari 2 aka VIP 2 in the year 2017 and her next production is Ponniyin Selva which will hit the theatre this year. She owns a production house named as Ocher Picture Production and also is the founder of the same