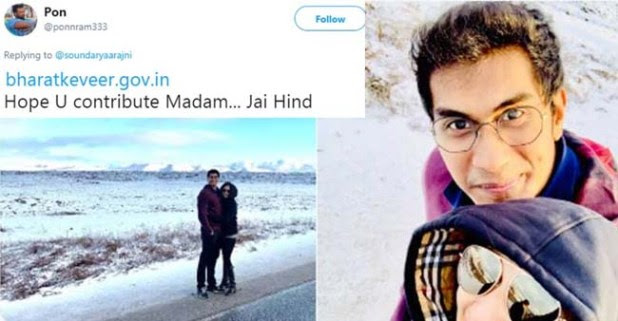 Recently, Soundarya Rajinikanth and Vishagan Vanangamudi exchanged the wedding vows in a traditional ceremony in Chennai. The wedding was one star-studded affair where many superstars mark their presence to give their blessings to the newlywed couple. Not only this, the bride’s father, Rajinikanth present their guests the most beautiful gifts in a wake of mother nature. As per TimesNow, ‘The family handed out packs of Need Seed Balls to all the guests who arrived to bless the happy couple. Seed Balls are made of cow dung and seeds of many trees and plants that grow once embedded in the earth.’

Soon after the wedding, the couple went off to their honeymoon in Iceland which is all about love and fun. Sharing the honeymoon pictures from Iceland on her Twitter handle, Soundarya wrote, “#Iceland #Honeymoon #Freezing #LovingIt #LivingLife #GodsAreWithUs #MissingVed”.

However, the post didn’t go well with the netizens with the ongoing situation in India over Pulwama attack. People ask her to stop sharing the pictures of her honeymoon as the whole country is mourning over the Jawans. One even said that Rajinikanth will get the hate over her daughter’s doing.

Have a look at the tweets:

Dear mam, here we lost our real hero’s not cinema hero’s… Do u have any sense.. How do like this update your honemoon photos..

Taken sis. But surprised to see your tweet in our timeline that you without mourning tweeting here in our time line

Bcoz of you daughters only our Thalaivar’s @rajinikanth image is getting spoiled from Tha movie Baba time itself pic.twitter.com/I6KtiwgsDv

#VedVishaganSoundarya #SoundaryaWedsVishagan while u njoy do take mourn for our killed Kashmir Jawans since they are the ones make India safe for u n family when return from luxurious holidays ! Samjey !!

Well, people connecting the pictures with the ongoing situation in India isn’t right as everyone knows and feel the pain of losing their Jawans.

Talking about Soundarya’s work front, she made her directorial debut with Kochadaiyaan in 2014 with Rajinikanth and Deepika Padukone in lead roles. Later she went on to direct her brother-in-law, Dhanush and Kajol in Velaiilla Pattadhari 2 aka VIP 2 that released in 2017.

Meanwhile, we are waiting for her to announce the next project, you guys stay tuned with us for more updates related to Bollywood and other bites!