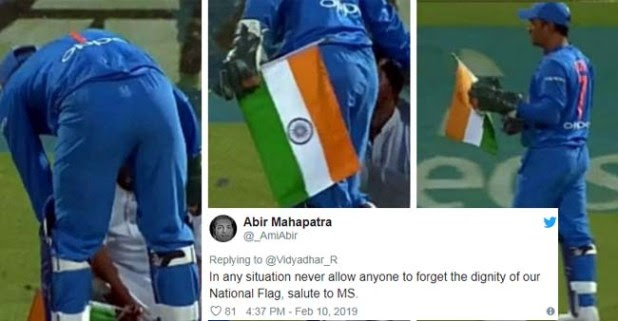 Mahendra Singh Dhoni, the man who is just beyond appreciation or we would say we are lacking with good adjectives as he deserves a lot more than just appreciation. The happening at the earlier match of India vs New Zealand at New Zealand’s soil is something worth mentioning.

During the match, a fan just came to the field breaking all the securities along with the Tricolor, but as he ran, the flag was almost falling down and was about to touch the ground and here at the crucial moment comes our veteran player Dhoni who caught the flag and safeguarded the dignity of our nation.

After watching the match, netizens went howling over the former captain cool, looking at his feelings for the nation, Twitterati’s have brought up best comments and tweets for Mahi. Take a look at the respect Dhoni has achieved for himself.

1. One of his fans wrote in his tweet, ” Ek Hi To Dil Hai Kitni Bar Jitoge Dhoni… Respect”

2. While another tweet by a user could be read as, ” I am out of words, his craze is on a whole new level.”

First thirteen instances were in India, But this is in NZ

I’m out of my words

!! His Craze is on a Whole new level

3. Twitter user Abir Mahapatra wrote in his tweet, ” In any situation never allow anyone to forget the dignity of our National flag, salute to MS.

In any situation never allow anyone to forget the dignity of our National Flag, salute to MS.

4. While another user fell in love with the action of former captain, he wrote, “The way he pulled the flag from touching the ground. Loved it…”

The way he pulled flag from touching the ground. Loved it!!

After the match the Indian all-rounder Vijay Shankar heartily who admires MS Dhoni said, “For someone like me, I try and learn from watching each and every player we have in our team because everyone has done something in the past and they have won matches for the team especially Dhoni, who has done a lot for the team. I definitely look up to him,”