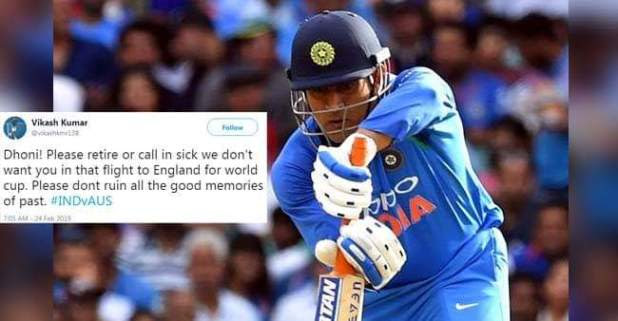 On Sunday, Australia won by a thrilling three-wicket win over India at the first T20I at Visakhapatnam. The game went down, after Jhye Richardson and Pat Cummins kept their nerve and scored 14 runs in the final over, bowled by Umesh Yadav. By opening the match first by Aussie skipper Aaron Finch, India finished with a below-par score of 126 for the loss of 7 wickets. Till the time the top scores came up as KL Rahul 50 (36), Dhoni 29 (37), and Virat Kohli 24 (17). For such a bad outing, MS Dhoni was criticized a lot on Twitter.

While Dhoni’s 29 did help India steady itself for the match but Australia scored the winning runs on the last ball of the match, made his innings stick out like a sore thumb. However, this didn’t go down well with the fans and they started trolling MS Dhoni on Twitter. His 29 runs didn’t help the team to win. He also denied Yuzvendra Chahal the strike in the death overs and took the matters in his own hands but clearly failed to middle the ball.

Here’s how Twitteratis bashed MS Dhoni for his slow performance:

Doesnt good sight to see that he can’t even give strike to #9 and he himself won’t score.. not good at all..#Dhoni #INDvAUS

Dhoni striking under 100 in a T20. Such a surprise! Lol. He’s finished with the bat. #INDvAUS

Dhoni! Please retire or call in sick we don’t want you in that flight to England for world cup. Please dont ruin all the good memories of past. #INDvAUS

Let’s not forget the 10+ runs which Dhoni let off by not running, and not hitting big ones either. #IndvsAus

Dhoni is hitting towards fielders every ball just to check which fielder is weak, so he could utilize it in World Cup. Legend! #INDvAUS

Two players perform as per expectations these days.

Dhoni will give you dots, Umesh won’t.

MS Dhoni is a great batsman who has played many knocks for the winning cause.

Ideally Dhoni should be sitting in his apartment’s park discussing politics with retired uncles of his colony instead of being in the playing eleven.#INDvAUS

Dhoni’s slow pace didn’t help India and at the end, Australia won the last-ball with three wickets to spare.