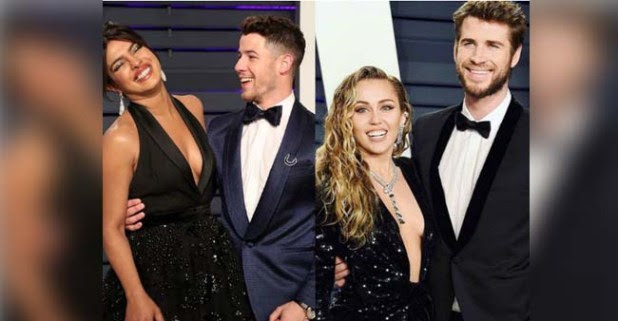 Priyanka Chopra and Nick Jonas are all over in love with each other. The couple is having a gala time together after their princess-like wedding in Jodhpur, Rajasthan.

Moreover, the couple is making the fans drool over their random picture on Instagram handles and can’t stop gushing about their candid moments. Priyanka who recently was seen in Hollywood film Isn’t It Romantic has shared a number of snaps on Instagram wearing a black backless dress in which she is looking mesmerized.

What’s more interesting, singer and actress, Miley Cyrus dropped a comment on one of the Priyanka Chopra’s photos, posted by celebrity make-up artist Pati Dubroff in which PeeCee wore the same black dress.

Miley commented, “Pretty! Love,” and fans can’t hold their excitement for the same and started talking about it. This has created a buzz among the fans as Miley has dated now PeeCee’s hubby Nick Jonas in past. In one section of comments, fans are asking the two Divas to pose for the camera together.

Well, not only the fans, but we are also surprised by Miley’s love for PeeCee!

Miley, on the other hand, is married to Liam Hemsworth who was seen with PeeCee in the movie, Isn’t It Romantic.

For the uninitiated, Priyanka’s husband Nick Jonas and Miley Cyrus dated each other for almost a year 2006-07, when they were only 13-year-olds. So, this reaction is expected from the fans and it is indeed legit. Commenting on Priyanka’s snap, Miley has proved that she has no hard feelings but love for her.

Miley had earlier marked her presence at the premiere of Isn’t It Romantic on behalf of her husband Liam who couldn’t attend as he was reportedly hospitalized at that time.

Talking about PeeCee, she is making a comeback in Bollywood after 2 years with The Sky Is Pink movie.