Gucci Is Selling Vintage Dirty Sneakers For Rs. 55,403 And Twitterati’s Are Going ROFL On It 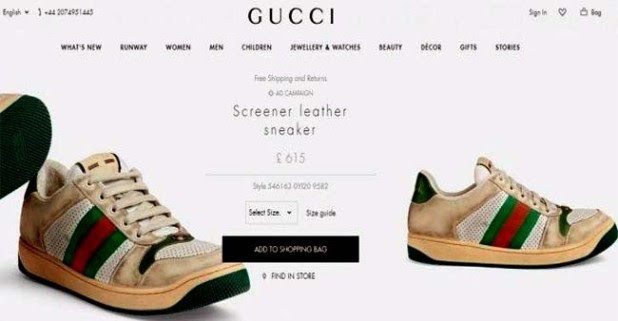 Even you will also agree on this: Social media is a weird place like hell! One can post anything so casually. For instance, let’s talk about the egg picture which broke Kylie Jenner’s world record of the most liked picture. Bizzare, isn’t it?

Recently, a well-known Italian luxury brand of fashion and leather goods, Gucci shared a post on their official website where they are selling a dirty pair of shoe or sneakers and not on low price indeed they are costing you Rs 55,403 if you would buy it. They described the sneakers as ‘vintage’, ‘influenced by classic trainers’ on its website. If you want to buy shoes, you have to go to their online shopping website.

Also, take a look at their official  description of this product on their site ‘Influenced by classic trainers from the ’70s, the Screener sneakers—named for the defensive sports move—feature the Web stripe on the side and vintage Gucci logo, treated for an allover distressed effect.’

All things considered, they’re clearly unique on the grounds that there is no real way to get filthy white shoes, right? (pun intended)

One month back, an Amazon vendor was selling coconut shells worth Rs 3,000, and a woman was selling slippers made from plastic bottles for nearly Rs 1,400.

Back to the famous brand Gucci, they have invited the tweeps to troll them online and we are sure this is the new meme in trend indeed! Have a look at the twitterati’s reaction after seeing this ‘beautiful’ sneakers:

Wow! What a time to be alive 🤗 #JeremyVine #Gucci

Do they sell them in the ‘I Saw You Coming’ store?

Anybody who gets gucci stuff have way to much money and not one ounce of dress sense.. @FloydMayweather is the king at this.

What do you make of these “dirty” trainers Gucci are selling for a mere £615? Bargain, right?! 🤔 #jeremyvine pic.twitter.com/ONqNUxgl7T